After completing this section, you should be able to apply the concept of hybridization to atoms such as N, O, P and S explain the structures of simple species containing these atoms.

Nitrogen is frequently found in organic compounds. As with carbon atoms, nitrogen atoms can be sp3-, sp2– or sp‑hybridized.

Note that, in this course, the term “lone pair” is used to describe an unshared pair of electrons.

The valence-bond concept of orbital hybridization can be extrapolated to other atoms including nitrogen, oxygen, phosphorus, and sulfur. In other compounds, covalent bonds that are formed can be described using hybrid orbitals. 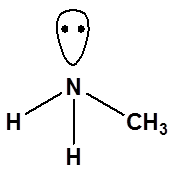 Phosphorus can have have expanded octets because it is in the n = 3 row.  Typically, phosphorus forms five covalent bonds.  In biological molecules, phosphorusis usually found in organophosphates.  Organophosphates are made up of a phosphorus atoms bonded to four oxygens, with one of the oxygens also bonded to a carbon.  In methyl phosphate, the phosphorus is sp3 hybridized and the O-P-O bond angle varying from 110 to 112o.

In biological system, sulfur is typically found in molecules called thiols or sulfides. In a thiol, the sulfur atim is conded to one hydrogens and one carbon and is analogous to an alcohol. In a sulfide, the sulfur is bonded to two carbons.  In both cases the sulfur is sp3hybridized and the bond angles are much less than the typicall 109.5o. 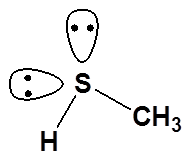 Identify geometry and lone pairs on each heteroatom of the molecules given.