Students often wonder why it is important to be able to tell whether a given bond is polar or not, and why they need to know which atoms carry a partial positive charge and which a partial negative charge. Consider the chloromethane (CH3Cl) molecule. The carbon atom is shown as carrying a partial positive charge. Now, recall that opposite charges attract. Thus, it seems reasonable that the slightly positive carbon atom in chloromethane should be susceptible to attack by a negatively charged species, such as the hydroxide ion, OH−. This theory is borne out in practice: hydroxide ions react with chloromethane by attacking the slightly positive carbon atom in the latter. It is often possible to rationalize chemical reactions in this manner, and you will find the knowledge of bond polarity indispensible when you start to write reaction mechanisms. Note: Because of the small difference in electronegativity between carbon and hydrogen, the C-H bond is normally assumed to be nonpolar.

Electronegativity is defined as the ability of an atom in a particular molecule to attract electrons to itself. The greater the value, the greater the attractiveness for electrons. 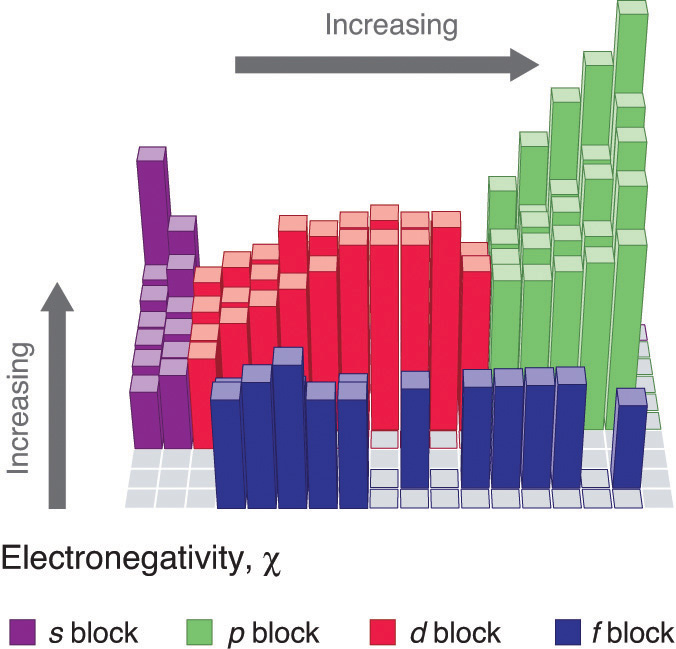 Unfortunately there is no direct way of measuring electronegativity. Dipole-moment measurements tell us about the electrical behavior of all electron pairs in the molecule, not just the bonding pair in which we are interested. Also, the polarity of a bond depends on whether the bond is a single, double, or triple bond and on what the other atoms and electron pairs in a molecule are. Therefore the dipole moment cannot tell us quantitatively the difference between the electronegativities of two bonded atoms. Various attempts have been made over the years to derive a scale of electronegativities for the elements, none of which is entirely satisfactory. Nevertheless most of these attempts agree in large measure in telling us which elements are more electronegative than others. The best-known of these scales was devised by the Nobel prize-winning California chemist Linus Pauling (1901 to 1994) and is shown in the periodic table found below. In this scale a value of 4.0 is arbitrarily given to the most electronegative element, fluorine, and the other electronegativities are scaled relative to this value.

Electronegativities of the elements

What if two atoms of equal electronegativity bond together?

Consider a bond between two atoms, A and B. If the atoms are equally electronegative, both have the same tendency to attract the bonding pair of electrons, and so it will be found on average half way between the two atoms:

To get a bond like this, A and B would usually have to be the same atom. You will find this sort of bond in, for example, H2 or Cl2 molecules. Note:  It’s important to realize that this is an average picture. The electrons are actually in a molecular orbital, and are moving around all the time within that orbital. This sort of bond could be thought of as being a “pure” covalent bond – where the electrons are shared evenly between the two atoms.

What if B is slightly more electronegative than A?

B will attract the electron pair rather more than A does.

If B is a lot more electronegative than A, then the electron pair is dragged right over to B’s end of the bond. To all intents and purposes, A has lost control of its electron, and B has complete control over both electrons. Ions have been formed. The bond is then an ionic bond rather than a covalent bond.

A “spectrum” of bonds

The implication of all this is that there is no clear-cut division between covalent and ionic bonds. In a pure covalent bond, the electrons are held on average exactly half way between the atoms. In a polar bond, the electrons have been dragged slightly towards one end. How far does this dragging have to go before the bond counts as ionic? There is no real answer to that. Sodium chloride is typiclly considered an ionic solid, but even here the sodium has not completely lost control of its electron. Because of the properties of sodium chloride, however, we tend to count it as if it were purely ionic. Lithium iodide, on the other hand, would be described as being “ionic with some covalent character”. In this case, the pair of electrons has not moved entirely over to the iodine end of the bond. Lithium iodide, for example, dissolves in organic solvents like ethanol – not something which ionic substances normally do.

In a simple diatomic molecule like HCl, if the bond is polar, then the whole molecule is polar. What about more complicated molecules?

Consider CCl4, (left panel in figure above), which as a molecule is not polar – in the sense that it doesn’t have an end (or a side) which is slightly negative and one which is slightly positive. The whole of the outside of the molecule is somewhat negative, but there is no overall separation of charge from top to bottom, or from left to right.

A polar molecule will need to be “lop-sided” in some way.

Figure: How Individual Bond Dipole Moments Are Added Together to Give an Overall Molecular Dipole Moment for Two Triatomic Molecules with Different Structures. (a) In CO2, the C–O bond dipoles are equal in magnitude but oriented in opposite directions (at 180°). Their vector sum is zero, so CO2 therefore has no net dipole. (b) In H2O, the O–H bond dipoles are also equal in magnitude, but they are oriented at 104.5° to each other. Hence the vector sum is not zero, and H2O has a net dipole moment.

Molecules with asymmetrical charge distributions have a net dipole moment.

For each three-dimensional molecular geometry, predict whether the bond dipoles cancel. If they do not, then the molecule has a net dipole moment.