sp Hybrid Orbitals and the Structure of Acetylene

Finally, the hybrid orbital concept applies well to triple-bonded groups, such as alkynes and nitriles. Consider, for example, the structure of ethyne (common  name acetylene), the simplest alkyne.

This molecule is linear: all four atoms lie in a straight line. The carbon-carbon triple bond is only 1.20Å long. In the hybrid orbital picture of acetylene, both carbons are sp-hybridized. In an sp-hybridized carbon, the 2s orbital combines with the 2px orbital to form two sp hybrid orbitals that are oriented at an angle of 180°with respect to each other (eg. along the x axis). The 2py and 2pz orbitals remain unhybridized, and are oriented perpendicularly along the y and z axes, respectively. 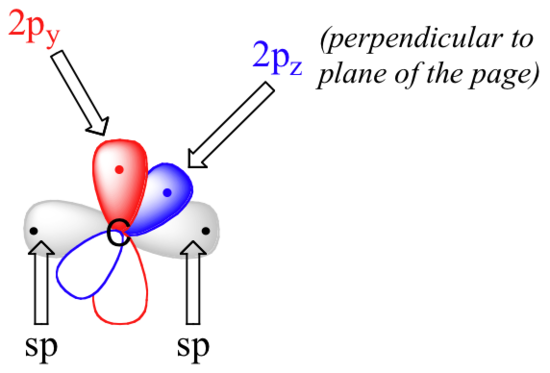 The C-C sigma bond, then, is formed by the overlap of one sp orbital from each of the carbons, while the two C-H sigma bonds are formed by the overlap of the second sp orbital on each carbon with a 1s orbital on a hydrogen.  Each carbon atom still has two half-filled 2py and 2pz orbitals, which are perpendicular both to each other and to the line formed by the sigma bonds.  These two perpendicular pairs of p orbitals form two pi bonds between the carbons, resulting in a triple bond overall (one sigma bond plus two pi bonds).

The hybrid orbital concept nicely explains another experimental observation: single bonds adjacent to double and triple bonds are progressively shorter and stronger than ‘normal’ single bonds, such as the one in a simple alkane.  The carbon-carbon bond in ethane (structure A below) results from the overlap of two sp3 orbitals.

Notice that as the bond order increases the bond length decreases and the bond strength increases.

1-Cyclohexyne is a very strained molecule. By looking at the molecule explain why there is such a intermolecular strain using the knowledge of hybridization and bond angles.

The alkyne is a sp hybridized orbital. By looking at a sp orbital, we can see that the bond angle is 180°, but in cyclohexane the regular angles would be 109.5°. Therefore the molecule would be strained to force the 180° to be a 109°.