sp^2 Hybrid Orbitals and the Structure of Ethylene

A key component of using Valence Bond Theory correctly is being able to use the Lewis dot diagram correctly. Ethene has a double bond between the carbons and single bonds between each hydrogen and carbon: each bond is represented by a pair of dots, which represent electrons. Each carbon requires a full octet and each hydrogen requires a pair of electrons. The correct Lewis structure for ethene is shown below:

In the molecule ethene, both carbon atoms will be sp2hybridized and have one unpaired electron in a non-hybridized p orbital.

The 3-dimensional model of ethene is therefore planar with H-C-H and H-C-C bond angles of 120o…the π-bond is not shown in this picture.

Valence Shell Electron Pair Repulsion (VSEPR) Theory is used to predict the bond angles and spatial positions of the carbon and hydrogen atoms of ethene and to determine the bond order of the carbon atoms (the number of bonds formed between them). Each carbon atom is of the general arrangement AX3, where A is the central atom surrounded by three other atoms (denoted by X); compounds of this form adopt trigonal planar geometry, forming 120 degree bond angles. In order for the unhybridized p orbitals to successfully overlap, the CH​2 must be coplanar: therefore, C2H4 is a planar molecule and each bond angle is about 120 degrees. The diagram below shows the bond lengths and hydrogen-carbon-carbon bond angles of ethene:

According to valence bond theory, two atoms form a covalent bond through the overlap of individual half-filled valence atomic orbitals, each containing one unpaired electron. In ethene, each hydrogen atom has one unpaired electron and each carbon is sp2 hybridized with one electron each sp​2 orbital. The fourth electron is in the p orbital that will form the pi bond. The bond order for ethene is simply the number of bonds between each atom: the carbon-carbon bond has a bond order of two, and each carbon-hydrogen bond has a bond order of one. 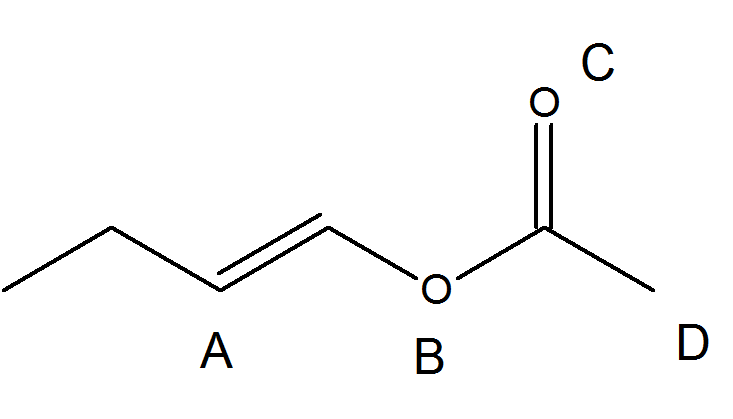 At each atom, what is the hybridization and the bond angle? At atom A draw the molecular orbital.