Figure 12.51 Structure of phylloquinone (K1), the 3 outside of the brackets indicates that the structural unit inside the brackets is repeated 3 times1

Green leafy vegetables, broccoli, Brussels sprouts, and asparagus are foods that are good sources of phylloquinone2.

Another form of vitamin K, menaquinone (K2), is synthesized by bacteria in the colon. Menaquinone comprises ~10% of absorbed vitamin K every day and can also be found in small amounts in animal products. Its structure is shown below3.

Figure 12.52 Structure of menaquinone (K2). Menaquinones have side chains of varying length4

In the structure above, if it was menaquinone-8, there would be 7 (8-1) repeating units of the structure inside the brackets above.

The synthetic form of vitamin K is menadione (K3), whose structure is shown below. 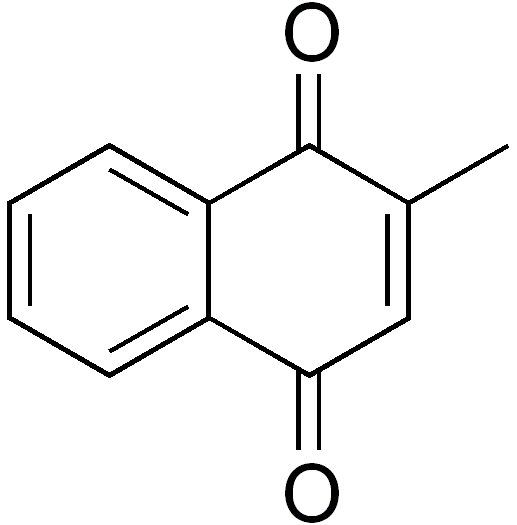 A tail, similar to the one found in menaquinone, has to be added to menadione for it to be biologically active.

Vitamin K is absorbed like other fat-soluble substances. Approximately 80% of phylloquinone and menaquinone are incorporated into chylomicrons and stored primarily in the liver2,6. Once metabolized, vitamin K is primarily excreted via bile in the feces, with a lesser amount excreted in urine6.