A: The Brønsted-Lowry definition of acidity and basicity

We’ll begin our discussion of acid-base chemistry with a couple of essential definitions. The first of these was proposed in 1923 by the Danish chemist Johannes Brønsted and the English chemist Thomas Lowry, and has come to be known as the Brønsted-Lowry definition of acidity and basicity.  An acid, by the Brønsted-Lowry definition, is a species which acts as a proton donor (i.e., it gives away an H+), while a base is a proton (H+) acceptor.  One of the most familiar examples of a Brønsted-Lowry acid-base reaction is between hydrochloric acid and hydroxide ion:

In this reaction, a proton is transferred from HCl (the acid, or proton donor) to hydroxide ion (the base, or proton acceptor). As we learned in the previous chapter, curved arrows depict the movement of electrons in this bond-breaking and bond-forming process.

Here is an organic acid-base reaction between acetic acid and methylamine:

In the reverse of this reaction, acetate ion is the base and methylammonium ion (protonated methylamine) is the acid.

What makes a compound acidic (likely to donate a proton) or basic (likely to accept a proton)? Answering that question is one of our main jobs in this chapter, and will require us to put to use much of what we learned about organic structure in the first two chapters, as well as the ideas about thermodynamics that we reviewed in chapter 5.

Clearly, methylammonium ion cannot act as a base – it does not have a reactive pair of electrons with which to accept a proton.

Later, in chapter 10, we will study reactions in which a pair of electrons in a pi bond of an alkene acts in a basic fashion – but for now, will concentrate on the basicity of non-bonding (lone pair) electrons.

Complete the reactions below – in other words, draw structures for the missing conjugate acids and conjugate bases that result from the curved arrows provided. 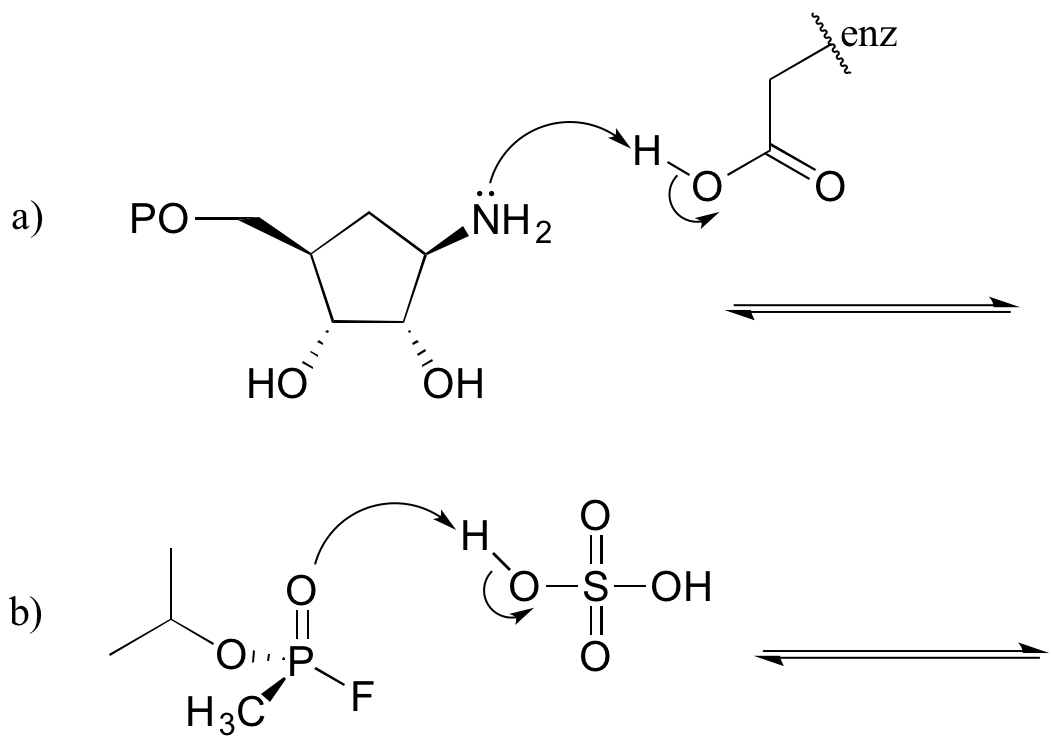 When a Brønsted acid HA dissociates in water, it increases the concentration of hydrogen ions in the solution, [latex] [H^+] [/latex]; conversely, Brønsted bases dissociate by taking a proton from the solvent (water) to generate [latex] [OH^-] [/latex].

The determination of a substance as a Brønsted-Lowry acid or base can only be done by observing the reaction. In the case of the HOH it is a base in the first case and an acid in the second case.

Water does not need to be involved in a Bronsted-Lowry reaction.  In general, for an acid HA and a base Z, we have

How can H2O be a base? I thought it was neutral?

For our first example of chemical reactivity, let’s look at a very simple reaction that occurs between hydroxide ion and hydrochloric acid:

This is an acid-base reaction: a proton is transferred from HCl, the acid, to hydroxide, the base. The product is water (the conjugate acid of hydroxide)  and chloride ion (the conjugate base of HCl). You have undoubtedly seen this reaction before in general chemistry.  Despite its simplicity (and despite the fact that the reactants and products are inorganic rather than organic), this reaction allows us to consider for the first time many of the fundamental ideas of organic chemistry that we will be exploring in various contexts throughout this text.

The hydrogen atom in HCl, on the other hand, has low electron density: it is electron-poor.  As you might expect, something that is electron-rich is attracted to something that is electron-poor.  As hydroxide and HCl move closer to each other, a lone pair of electrons on the electron-rich hydroxide oxygen is attracted by the electron-poor proton of HCl, and electron movement occurs towards the proton.  The two electrons in the hydrogen-chlorine sigma bond are repelled by this approaching hydroxide electron density, and therefore move even farther away from the proton and towards the chlorine nucleus.  The consequence of all of this electron movement is that the hydrogen-chlorine bond is broken, as the two electrons from that bond completely break free from the 1s orbital of the hydrogen and become a lone pair in the 3p orbital of a chloride anion.

At the same time that the hydrogen-chlorine bond is breaking, a new sigma bond forms between hydrogen and oxygen, containing the two electrons that previously were a lone pair on hydroxide.  The result of this bond formation is, of course, a water molecule.

Previously (section 6.1.), we saw how curved arrows were used to depict electron movement that occurs in chemical reactions, where bonds are broken and new bonds are formed.  The HCl + OH– reaction, for example, is depicted by drawing two curved arrows.

The first arrow originates at one of the lone pairs on the hydroxide oxygen and points to the ‘H’ symbol in the hydrogen bromide molecule, illustrating the ‘attack’ of the oxygen lone pair and subsequent formation of the new hydrogen-oxygen bond.  The second curved arrow originates at the hydrogen-bromine bond and points to the ‘Br’ symbol, indicating that this bond is breaking – the two electrons are ‘leaving’ and becoming a lone pair on bromide ion.

It is very important to emphasize at this point that these curved, two-barbed arrows always represent the movement of two electrons.  Most of this book will be devoted to the description of reaction mechanisms involving two-electron movement, so these full-headed arrows will become very familiar.

In the second semester, however, we will look at radical reaction mechanisms, where single-electron movement occurs.  For these processes, a curved, single-barbed (‘fish-hook‘) arrow will be used.

Draw electron movement arrows to illustrate the acid-base reaction between acetic acid, CH3COOH, and ammonia, NH3.  Draw out the full Lewis structures of reactants and products.