17. OTHER REACTIONS OF AROMATICS

An “arenediazonium salt” is formed by the reaction of an aromatic amine with nitrous acid at 0–5°C, and has the structure shown below.

In this case the diazonium salt is prepared using fluoroboric acid, HBF4, and sodium nitrite. The thermal decomposition of the salt, called the Balz-Schiemann reaction, can be quite hazardous.

Hypophosphorous acid has the structure shown below:

The presence of the letters “azo” in a compound’s name usually implies that a nitrogen‑nitrogen double bond is present in its structure. Azo compounds in which two aryl groups are joined by an $\ce{-}$N$\ce{=}$N$\ce{-}$ linkage  are usually very colorful.

Making the aromatic ring available for attack by nucleophiles

Most preparations of aromatic compounds we have seen (such as electrophilic aromatic substitution, as well as the Suzuki reaction covered in the previous section) involve the aromatic ring as nucleophile, reacting with an electrophilic reagent.  Nucleophilic aromatic substitution (in 17.1.) involves nucleophilic reagents, but it is limited to rings with strong electron-withdrawing groups ortho or para to a leaving group.  The most versatile way to make aromatic rings available for nucleophilic attack is to prepare arenediazonium salts, containing the ArN2+ ion.  The diagram below shows the variety of reactions possible with arenediazonium salts. 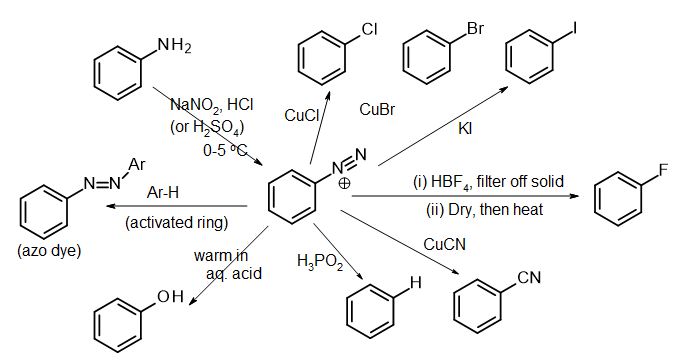 Arenediazonium salts are easily prepared from arylamines (anilines) using a process called diazotization.  The process involves dissolving the amine in a suitable acid, cooling in an ice bath to 0-5 oC, then adding sodium nitrite (NaNO2) solution.  The acid reacts with the NaNO2 to form nitrous acid (HNO2), which then reacts with the arylamine to form the arenediazonium salt. The most common salt to use for these reactions is the chloride (made using HCl as the acid), which are fairly soluble but decompose rapidly at room temperature.  However, in some reactions (such as phenol formation) the chloride ion may interfere and substitute a Cl, so in those cases the sulfate (made using H2SO4) is used.  Diazonium sulfates are a little more stable than chlorides, but they are also generally less soluble and thus more awkward to use.  Diazonium tetrafluoroborates are made from chlorides by adding HBF4; they are usually completely insoluble, which allows them to be filtered off, then dried for decomposition without water present to introduce a fluorine onto the ring.  This method for introducing fluorine onto an aromatic ring is called the Balz-Schiemann reaction.

Arenediazonium salts are useful intermediates, and they easily lose nitrogen react with a variety of nucleophiles, as shown in the diagram above.  Since nitrogen is very stable, and is lost as a gas, this provides a powerful driving force for these reactions to occur.  In the case of water or iodide ion, the nucleophile reacts without need for any catalysis.  However, many reactions of diazonium salts are catalyzed by copper(I), in which case the reaction is referred to as a Sandmeyer reaction.

One reaction that retains the two nitrogens involves coupling to another (electron-rich) aromatic ring, as shown on the left part of the reaction scheme.  This is very important in the artificial dye industry, which was mainly established using the production of these “azo dyes” after the discovery of Perkin’s mauve in 1856.

If other substituents are needed, these can be introduced during the synthesis.  If a meta substituent is needed, the substituent is introduced at or before the nitro stage; for ortho/para substituents, this can be done at the NH2 stage.  The amino group in an arylamine (aniline) is a very powerful activator, so many EAS reactions of arylamines rapidly introduce 2 or 3 substituents unless the NH2 group’s reactivity is moderated by formation of an amide – recall this method for protection of amines via acetylation, from chapter 16.  In some cases, the new substituent may also be reduced during the reduction of the nitro group, as in this synthesis of meta-propylbenzenediazonium chloride from benzene:

For the synthesis of the para isomer, the arylamine is acetylated before the Friedel-Crafts reaction, then deacetylated by heating with excess aq. HCl right before diazotization.

This para isomer synthesis shows the use of the acetyl group to control the reactivity of the amino group.  (An alternative synthesis could avoid this by introducing the propyl group first, before nitration.)  Although these syntheses appear to be long, they involve synthetic steps that are reliable and reproducible, and they follow a standard pattern.  Also, the fact that different substituents can be introduced at selected positions along the way makes this approach a very valuable synthetic sequence.

The Sandmeyer reaction is a subset of these reactions of diazonium salts, in cases where a copper(I) salt is used as a catalyst. It is an example of a radical-nucleophilic aromatic substitution. The Sandmeyer reaction provides a method through which one can perform unique transformations on benzene, such as halogenation, cyanation, trifluoromethylation.

The reaction was discovered in 1884 by Swiss chemist Traugott Sandmeyer, when he synthesized phenylacetylene from benzenediazonium chloride and copper(I) acetylide. The reaction is a method for substitution of an aromatic amino group via preparation of its diazonium salt followed by its displacement with a nucleophile, catalyzed by copper(I) salts. The nucleophile can include halide anions, cyanide, thiols, water, and others. The reaction does not proceed well with the fluoride anion, but fluorination can be carried out using tetrafluoroborate anions (see below).

The nitrous acid is typically prepared in situ from sodium nitrite and acid. Following two protonation steps, one equivalent of water is lost to form the nitrosonium ion. The nitrosonium ion then acts as an electrophile in a reaction with an aromatic (or heterocyclic) amine, such as aniline, to form a diazonium salt, proceeding through a nitrosamine intermediate.[4] The substitution of the aromatic diazo group with a halogen or pseudohalogen is initiated by a one-electron transfer mechanism catalyzed by copper(I) to form an aryl radical with loss of nitrogen gas.[5][6][7][8] The substituted arene is formed through a radical mechanism with regeneration of the copper(I) catalyst. This reaction is known as the Sandmeyer reaction and is an example of a radical-nucleophilic aromatic substitution. The radical mechanism of the Sandmeyer reaction was resolved through the detection of biaryl byproducts.[8] It proceeds through the following mechanism.

Formation of the nitrosonium ion

The nitrosonium ion (NO+) is formed from nitrous acid (HNO2) by a mechanism analogous to formation of NO2+ from HNO3, which we saw in section 14.2. The mechanism here can occur in water, because HNO2 is more easily protonated (the first step) than is HNO3.

Formation of the benzenediazonium ion

The mechanism for formation of the benzenediazonium is beyond the scope of this class, but the reaction can be regarded overall as a dehydration:

Aryl iodides can be prepared simply by treating the diazonium salt (chloride or sulfate) with iodide ion, usually as a solution of sodium or potassium iodide.  A copper(I) catalyst is not essential, though it is sometimes used.

For preparation of aryl bromides and chlorides, the Sandmeyer reaction is used, since the reaction is sluggish without copper(I) catalysis.  The corresponding copper halide is used – CuBr for Br, and CuCl for Cl, for example[1]:

The Balz–Schiemann reaction uses tetrafluoroborate ion and delivers the halide-substituted product, fluorobenzene, which is not obtained by the use of copper fluorides.

Another use of the Sandmeyer reaction is for cyanation which allows for the formation of benzonitriles, an important class of organic compounds.

Aromatic iodination can only be accomplished directly on highly activated benzene compounds, such as aniline, or indirectly by way of a diazonium intermediate. Once again, a deactivated amino group is the precursor of p-nitroaniline (prb.#3). This aniline derivative requires the more electrophilic iodine chloride (ICl) for ortho-iodination because of the presence of a deactivating nitro substituent. Finally, the third iodine is introduced by the diazonium ion procedure.

Propose a synthesis for each of the following compounds from benzene.

Propose a synthesis for each of the following molecules from benzene via the diazonium ion. 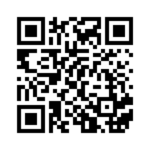