In a ketone such as 1, the carbonyl carbon has an oxidation state of +2.  We will define a “carbonyl equivalent” as a structure 2 which has a central carbon in the same oxidation state (+2), attached to common electronegative atoms (shown as Y1, Y2) such as nitrogen, oxygen or sulfur.

It turns out that the C=O bond is very strong, and ketones are very stable compounds.  For this reason, compounds of structure 2 (carbonyl equivalents) will hydrolyze easily to the ketone 1 in the presence of aqueous acid.  The acid activates the carbonyl equivalent, and makes it vulnerable to attach by water, which ultimately leads to ketone 1. 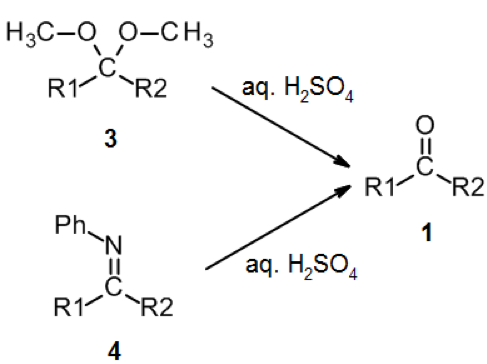 Structures 3 (an acetal) and 4 (an imine) are common examples of carbonyl equivalents found in nature and in the lab.  In both cases these compounds can be made and isolated, but when they are treated with aqueous acid (H3O+, usually as aqueous HCl or aqueous H2SO4) they hydrolyze to ketone 1.

Structures such as 5 where the electronegative atoms are halogens do not hydrolyze with aqueous acid, because the halogen atoms are not basic enough to be significantly protonated by the acid, though they can sometimes be hydrolyzed using aqueous base.