Psychologists striving to understand the human mind may study the nervous system. Learning how the body’s cells and organs function can help us understand the biological basis of human psychology. The nervous system is composed of two basic cell types: glial cells (also known as glia) and neurons. Glial cells are traditionally thought to play a supportive role to neurons, both physically and metabolically. Glial cells provide scaffolding on which the nervous system is built, help neurons line up closely with each other to allow neuronal communication, provide insulation to neurons, transport nutrients and waste products, and mediate immune responses. For years, researchers believed that there were many more glial cells than neurons; however, more recent work from Suzanna Herculano-Houzel’s laboratory has called this long-standing assumption into question and has provided important evidence that there may be a nearly 1:1 ratio of glia cells to neurons. This is important because it suggests that human brains are more similar to other primate brains than previously thought (Azevedo et al, 2009; Hercaulano-Houzel, 2012; Herculano-Houzel, 2009). Neurons, on the other hand, serve as interconnected information processors that are essential for all of the tasks of the nervous system. This section briefly describes the structure and function of neurons.

Neurons are the central building blocks of the nervous system, 86 billion strong at birth. Like all cells, neurons consist of several different parts, each serving a specialized function. A neuron’s outer surface is made up of a semipermeable membrane. This membrane allows smaller molecules and molecules without an electrical charge to pass through it, while stopping larger or highly charged molecules. 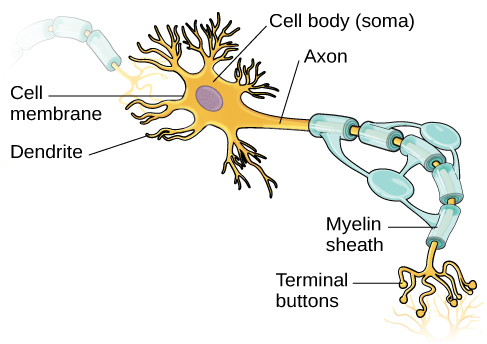 Figure 1. This illustration shows a prototypical neuron, which is being myelinated by a glial cell.

Axons range in length from a fraction of an inch to several feet. In some axons, glial cells form a fatty substance known as the myelin sheath, which coats the axon and acts as an insulator, increasing the speed at which the signal travels. The myelin sheath is not continuous and there are small gaps that occur down the length of the axon. These gaps in the myelin sheath are known as the Nodes of Ranvier. The myelin sheath is crucial for the normal operation of the neurons within the nervous system: the loss of the insulation it provides can be detrimental to normal function. To understand how this works, let’s consider an example. PKU, a genetic disorder discussed earlier, causes a reduction in myelin and abnormalities in white matter cortical and subcortical structures. The disorder is associated with a variety of issues including severe cognitive deficits, exaggerated reflexes, and seizures (Anderson & Leuzzi, 2010; Huttenlocher, 2000). Another disorder, multiple sclerosis (MS), an autoimmune disorder, involves a large-scale loss of the myelin sheath on axons throughout the nervous system. The resulting interference in the electrical signal prevents the quick transmittal of information by neurons and can lead to a number of symptoms, such as dizziness, fatigue, loss of motor control, and sexual dysfunction. While some treatments may help to modify the course of the disease and manage certain symptoms, there is currently no known cure for multiple sclerosis.

This video shows the structure and physiology of a neuron.

You can view the transcript for “2-Minute Neuroscience: The Neuron” here (opens in new window).

Figure 2. (a) The synaptic cleft is the space between the terminal button of one neuron and the dendrite of another neuron. (b) In this pseudo-colored image from a scanning electron microscope, a terminal button (green) has been opened to reveal the synaptic vesicles (orange and blue) inside. Each vesicle contains about 10,000 neurotransmitter molecules. (credit b: modification of work by Tina Carvalho, NIH-NIGMS; scale-bar data from Matt Russell)

axon: major extension of the soma
dendrite: branch-like extension of the soma that receives incoming signals from other neurons
glial cell: nervous system cell that provides physical and metabolic support to neurons, including neuronal insulation and communication, and nutrient and waste transport
myelin sheath: fatty substance that insulates axons
neuron: cells in the nervous system that act as interconnected information processors, which are essential for all of the tasks of the nervous system
neurotransmitter: chemical messenger of the nervous system
receptor: protein on the cell surface where neurotransmitters attach
semipermeable membrane: cell membrane that allows smaller molecules or molecules without an electrical charge to pass through it, while stopping larger or highly charged molecules
soma: cell body
synapse: small gap between two neurons where communication occurs
synaptic vesicle: storage site for neurotransmitters