Schizophrenia is a devastating psychological disorder that is characterized by major disturbances in thought, perception, emotion, and behavior. About 1% of the population experiences schizophrenia in their lifetime, and usually the disorder is first diagnosed during early adulthood (early to mid-20s). Most people with schizophrenia experience significant difficulties in many day-to-day activities, such as holding a job, paying bills, caring for oneself (grooming and hygiene), and maintaining relationships with others. Frequent hospitalizations are more often the rule rather than the exception with schizophrenia. Even when they receive the best treatments available, many with schizophrenia will continue to experience serious social and occupational impairment throughout their lives.

Schizophrenia is considered a psychotic disorder, or one in which the person’s thoughts, perceptions, and behaviors are impaired to the point where she is not able to function normally in life. In informal terms, one who suffers from a psychotic disorder (that is, has a psychosis) is disconnected from the world in which most of us live.

The main symptoms of schizophrenia include hallucinations, delusions, disorganized thinking, disorganized or abnormal motor behavior, and negative symptoms (APA, 2013). A hallucination is a perceptual experience that occurs in the absence of external stimulation. Auditory hallucinations (hearing voices) occur in roughly two-thirds of patients with schizophrenia and are by far the most common form of hallucination (Andreasen, 1987). The voices may be familiar or unfamiliar, they may have a conversation or argue, or the voices may provide a running commentary on the person’s behavior (Tsuang, Farone, & Green, 1999). 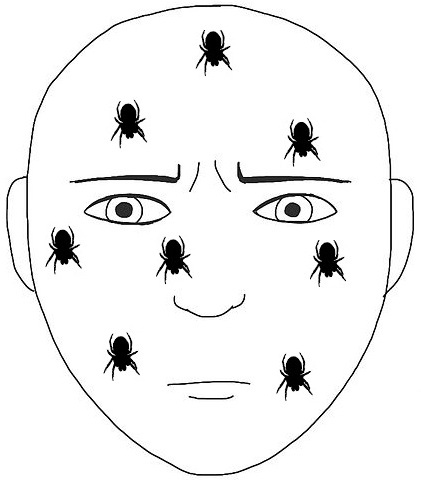 Figure 1. Tactile hallucinations, like that of imaginary spiders crawling on the skin, are another type of hallucination.

Delusions are beliefs that are contrary to reality and are firmly held even in the face of contradictory evidence. Many of us hold beliefs that some would consider odd, but a delusion is easily identified because it is clearly absurd. A person with schizophrenia may believe that his mother is plotting with the FBI to poison his coffee, or that his neighbor is an enemy spy who wants to kill him. These kinds of delusions are known as paranoid delusions, which involve the (false) belief that other people or agencies are plotting to harm the person. People with schizophrenia also may hold grandiose delusions, beliefs that one holds special power, unique knowledge, or is extremely important. For example, the person who claims to be Jesus Christ, or who claims to have knowledge going back 5,000 years, or who claims to be a great philosopher is experiencing grandiose delusions. Other delusions include the belief that one’s thoughts are being removed (thought withdrawal) or thoughts have been placed inside one’s head (thought insertion). Another type of delusion is somatic delusion, which is the belief that something highly abnormal is happening to one’s body (e.g., that one’s kidneys are being eaten by cockroaches).

Disorganized thinking refers to disjointed and incoherent thought processes—usually detected by what a person says. The person might ramble, exhibit loose associations (jump from topic to topic), or talk in a way that is so disorganized and incomprehensible that it seems as though the person is randomly combining words. Disorganized thinking is also exhibited by blatantly illogical remarks (e.g., “Fenway Park is in Boston. I live in Boston. Therefore, I live at Fenway Park.”) and by tangentiality: responding to others’ statements or questions by remarks that are either barely related or unrelated to what was said or asked. For example, if a person diagnosed with schizophrenia is asked if she is interested in receiving special job training, she might state that she once rode on a train somewhere. To a person with schizophrenia, the tangential (slightly related) connection between job training and riding a train are sufficient enough to cause such a response.

Disorganized or abnormal motor behavior refers to unusual behaviors and movements: becoming unusually active, exhibiting silly child-like behaviors (giggling and self-absorbed smiling), engaging in repeated and purposeless movements, or displaying odd facial expressions and gestures. In some cases, the person will exhibit catatonic behaviors, which show decreased reactivity to the environment, such as posturing, in which the person maintains a rigid and bizarre posture for long periods of time, or catatonic stupor, a complete lack of movement and verbal behavior.

Schizophrenia has positive and negative symptoms. Positive symptoms of schizophrenia are symptoms of commission, meaning they are something that individuals do or think. Examples include the hallucinations, delusions, and bizarre or disorganized behavior describe above. Negative symptoms are those that reflect noticeable decreases and absences in certain behaviors, emotions, or drives (Green, 2001). A person who exhibits diminished emotional expression shows no emotion in his facial expressions, speech, or movements, even when such expressions are normal or expected (also known as flat affect). Avolition is characterized by a lack of motivation to engage in self-initiated and meaningful activity, including the most basic of tasks, such as bathing and grooming. Alogia refers to reduced speech output; in simple terms, patients do not say much. Another negative symptom is asociality, or social withdrawal and lack of interest in engaging in social interactions with others. A final negative symptom, anhedonia, refers to an inability to experience pleasure. One who exhibits anhedonia expresses little interest in what most people consider to be pleasurable activities, such as hobbies, recreation, or sexual activity.

Watch this video and try to identify which classic symptoms of schizophrenia are shown.

When considering the role of genetics in schizophrenia, as in any disorder, conclusions based on family and twin studies are subject to criticism. This is because family members who are closely related (such as siblings) are more likely to share similar environments than are family members who are less closely related (such as cousins); further, identical twins may be more likely to be treated similarly by others than might fraternal twins. Thus, family and twin studies cannot completely rule out the possible effects of shared environments and experiences. Such problems can be corrected by using adoption studies, in which children are separated from their parents at an early age. One of the first adoption studies of schizophrenia conducted by Heston (1966) followed 97 adoptees, including 47 who were born to mothers with schizophrenia, over a 36-year period. Five of the 47 adoptees (11%) whose mothers had schizophrenia were later diagnosed with schizophrenia, compared to none of the 50 control adoptees. Other adoption studies have consistently reported that for adoptees who are later diagnosed with schizophrenia, their biological relatives have a higher risk of schizophrenia than do adoptive relatives (Shih, Belmonte, & Zandi, 2004).

If we accept that schizophrenia is at least partly genetic in origin, as it seems to be, it makes sense that the next step should be to identify biological abnormalities commonly found in people with the disorder. Perhaps not surprisingly, a number of neurobiological factors have indeed been found to be related to schizophrenia. One such factor that has received considerable attention for many years is the neurotransmitter dopamine. Interest in the role of dopamine in schizophrenia was stimulated by two sets of findings: drugs that increase dopamine levels can produce schizophrenia-like symptoms, and medications that block dopamine activity reduce the symptoms (Howes & Kapur, 2009). The dopamine hypothesis of schizophrenia proposed that an overabundance of dopamine or too many dopamine receptors are responsible for the onset and maintenance of schizophrenia (Snyder, 1976). More recent work in this area suggests that abnormalities in dopamine vary by brain region and thus contribute to symptoms in unique ways. In general, this research has suggested that an overabundance of dopamine in the limbic system may be responsible for some symptoms, such as hallucinations and delusions, whereas low levels of dopamine in the prefrontal cortex might be responsible primarily for the negative symptoms (avolition, alogia, asociality, and anhedonia) (Davis, Kahn, Ko, & Davidson, 1991). In recent years, serotonin has received attention, and newer antipsychotic medications used to treat the disorder work by blocking serotonin receptors (Baumeister & Hawkins, 2004). 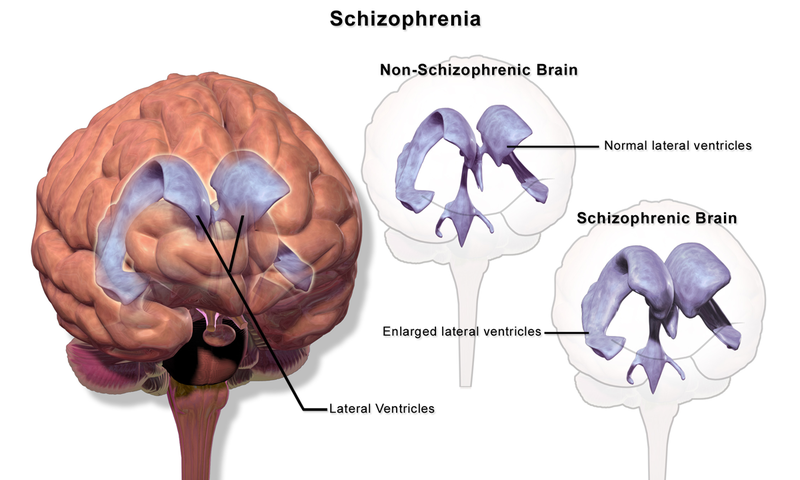 Figure 2. Schizophrenia is associated with enlarged ventricles in the brain.

Brain imaging studies reveal that people with schizophrenia have enlarged ventricles, the cavities within the brain that contain cerebral spinal fluid (Green, 2001). This finding is important because larger than normal ventricles suggests that various brain regions are reduced in size, thus implying that schizophrenia is associated with a loss of brain tissue. In addition, many people with schizophrenia display a reduction in gray matter (cell bodies of neurons) in the frontal lobes (Lawrie & Abukmeil, 1998), and many show less frontal lobe activity when performing cognitive tasks (Buchsbaum et al., 1990). The frontal lobes are important in a variety of complex cognitive functions, such as planning and executing behavior, attention, speech, movement, and problem solving. Hence, abnormalities in this region provide merit in explaining why people with schizophrenia experience deficits in these of areas.

Why do people with schizophrenia have these brain abnormalities? A number of environmental factors that could impact normal brain development might be at fault. High rates of obstetric complications in the births of children who later developed schizophrenia have been reported (Cannon, Jones, & Murray, 2002). In addition, people are at an increased risk for developing schizophrenia if their mother was exposed to influenza during the first trimester of pregnancy (Brown et al., 2004). Research has also suggested that a mother’s emotional stress during pregnancy may increase the risk of schizophrenia in offspring. One study reported that the risk of schizophrenia is elevated substantially in offspring whose mothers experienced the death of a relative during the first trimester of pregnancy (Khashan et al., 2008).

Early detection and treatment of conditions such as heart disease and cancer have improved survival rates and quality of life for people who suffer from these conditions. A new approach involves identifying people who show minor symptoms of psychosis, such as unusual thought content, paranoia, odd communication, delusions, problems at school or work, and a decline in social functioning—which are coined prodromal symptoms—and following these individuals over time to determine which of them develop a psychotic disorder and which factors best predict such a disorder. A number of factors have been identified that predict a greater likelihood that prodromal individuals will develop a psychotic disorder: genetic risk (a family history of psychosis), recent deterioration in functioning, high levels of unusual thought content, high levels of suspicion or paranoia, poor social functioning, and a history of substance abuse (Fusar-Poli et al., 2013). Further research will enable a more accurate prediction of those at greatest risk for developing schizophrenia, and thus to whom early intervention efforts should be directed.

catatonic behavior: decreased reactivity to the environment; includes posturing and catatonic stupor
delusion: belief that is contrary to reality and is firmly held, despite contradictory evidence
disorganized/abnormal motor behavior: highly unusual behaviors and movements (such as child-like behaviors), repeated and purposeless movements, and displaying odd facial expressions and gestures
disorganized thinking: disjointed and incoherent thought processes, usually detected by what a person says
dopamine hypothesis: theory of schizophrenia that proposes that an overabundance of dopamine or dopamine receptors is responsible for the onset and maintenance of schizophrenia
grandiose delusion: characterized by beliefs that one holds special power, unique knowledge, or is extremely important
hallucination: perceptual experience that occurs in the absence of external stimulation, such as the auditory hallucinations (hearing voices) common to schizophrenia
negative symptom: characterized by decreases and absences in certain normal behaviors, emotions, or drives, such as an expressionless face, lack of motivation to engage in activities, reduced speech, lack of social engagement, and inability to experience pleasure
paranoid delusion: characterized by beliefs that others are out to harm them
prodromal symptom: in schizophrenia, one of the early minor symptoms of psychosis
schizophrenia: severe disorder characterized by major disturbances in thought, perception, emotion, and behavior with symptoms that include hallucinations, delusions, disorganized thinking and behavior, and negative symptoms
somatic delusion: belief that something highly unusual is happening to one’s body or internal organs
ventricle: one of the fluid-filled cavities within the brain