Let’s return to our discussion of cystic fibrosis. Cystic fibrosis (CF) is caused by a defect in a single transmembrane protein: cystic fibrosis transmembrane conductance regulator (CFTR), as seen in Figure 1. This regulator is a chloride ion channel that crosses through the plasma membrane. This channel is specifically active in epithelial tissues where it normally helps produce thin mucus via the movement of water. When mutated, the channel does not work properly and mucus becomes thick and viscous. This in turn leads directly to many of the symptoms of CF: thick, sticky mucus, frequent chest infections, and coughing or shortness of breath. 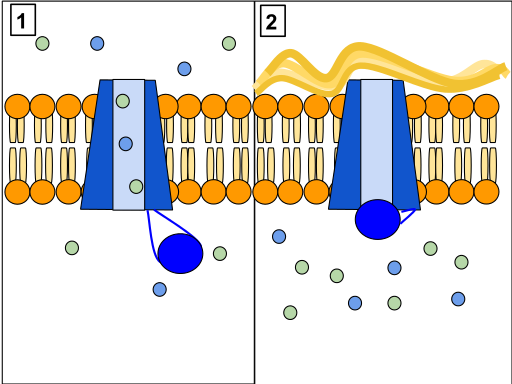 Cystic fibrosis is a difficult disease to treat. As we mentioned at the beginning of the module, patients with CF often suffer lung infections and sometimes require lung transplants. In addition to this, many CF patients are on one or more antibiotics at all times—even when healthy—to suppress infection. Several mechanical techniques are used to dislodge sputum and encourage its expectoration. In the hospital setting, chest physiotherapy is utilized. As lung disease worsens, mechanical breathing support may become necessary. Bi-lateral lung transplantation often becomes necessary for individuals with cystic fibrosis as lung function and exercise tolerance declines.