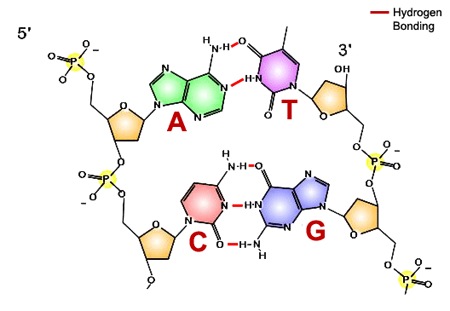 Both copying and reading the information stored in DNA relies on base pairing between two nucleic acid polymer strands. Recall that DNA structure is a double helix (see Figure 1).

The sugar deoxyribose with the phosphate group forms the scaffold or backbone of the molecule (highlighted in yellow in Figure 1). Bases point inward. Complementary bases form hydrogen bonds with each other within the double helix. See how the bigger bases (purines) pair with the smaller ones (pyrimidines). This keeps the width of the double helix constant. More specifically, A pairs with T and C pairs with G. As we discuss the function of DNA in subsequent sections, keep in mind that there is a chemical reason for specific pairing of bases.