The nucleotides combine with each other to produce phosphodiester bonds. The phosphate residue attached to the 5′ carbon of the sugar of one nucleotide forms a second ester linkage with the hydroxyl group of the 3′ carbon of the sugar of the next nucleotide, thereby forming a 5′-3′ phosphodiester bond. In a polynucleotide, one end of the chain has a free 5′ phosphate, and the other end has a free 3′-OH. These are called the 5′ and 3′ ends of the chain.

In the 1950s, Francis Crick and James Watson worked together to determine the structure of DNA at the University of Cambridge, England. Other scientists like Linus Pauling and Maurice Wilkins were also actively exploring this field. Pauling previously had discovered the secondary structure of proteins using X-ray crystallography. In Wilkins’ lab, researcher Rosalind Franklin was using X-ray diffraction methods to understand the structure of DNA. Watson and Crick were able to piece together the puzzle of the DNA molecule on the basis of Franklin’s data because Crick had also studied X-ray diffraction (Figure 2). In 1962, James Watson, Francis Crick, and Maurice Wilkins were awarded the Nobel Prize in Medicine. Unfortunately, by then Franklin had died, and Nobel prizes are not awarded posthumously. 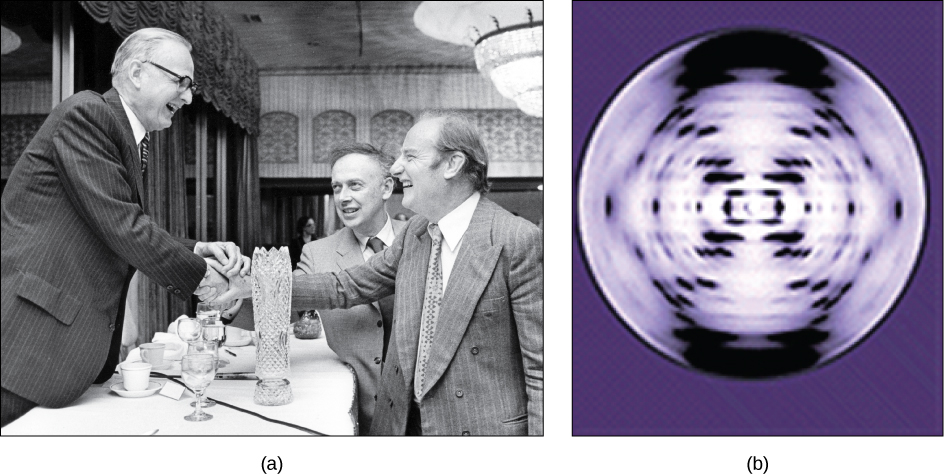 Watson and Crick proposed that DNA is made up of two strands that are twisted around each other to form a right-handed helix. Base pairing takes place between a purine and pyrimidine on opposite strands, so that A pairs with T, and G pairs with C (suggested by Chargaff’s Rules). Thus, adenine and thymine are complementary base pairs, and cytosine and guanine are also complementary base pairs. The base pairs are stabilized by hydrogen bonds: adenine and thymine form two hydrogen bonds and cytosine and guanine form three hydrogen bonds. The two strands are anti-parallel in nature; that is, the 3′ end of one strand faces the 5′ end of the other strand. The sugar and phosphate of the nucleotides form the backbone of the structure, whereas the nitrogenous bases are stacked inside, like the rungs of a ladder. Each base pair is separated from the next base pair by a distance of 0.34 nm, and each turn of the helix measures 3.4 nm. Therefore, 10 base pairs are present per turn of the helix. The diameter of the DNA double-helix is 2 nm, and it is uniform throughout. Only the pairing between a purine and pyrimidine and the antiparallel orientation of the two DNA strands can explain the uniform diameter. The twisting of the two strands around each other results in the formation of uniformly spaced major and minor grooves (Figure 3).