As we just learned, the main fabric of the membrane is composed of two layers of phospholipid molecules. The hydrophilic or “water-loving” areas of these molecules (which looks like a collection of balls in an artist’s rendition of the model) (Figure 1) are in contact with the aqueous fluid both inside and outside the cell. Thus, both surfaces of the plasma membrane are hydrophilic. In contrast, the interior of the membrane, between its two surfaces, is a hydrophobic or nonpolar region because of the fatty acid tails. This region has no attraction for water or other polar molecules (we will discuss this further in the next page). 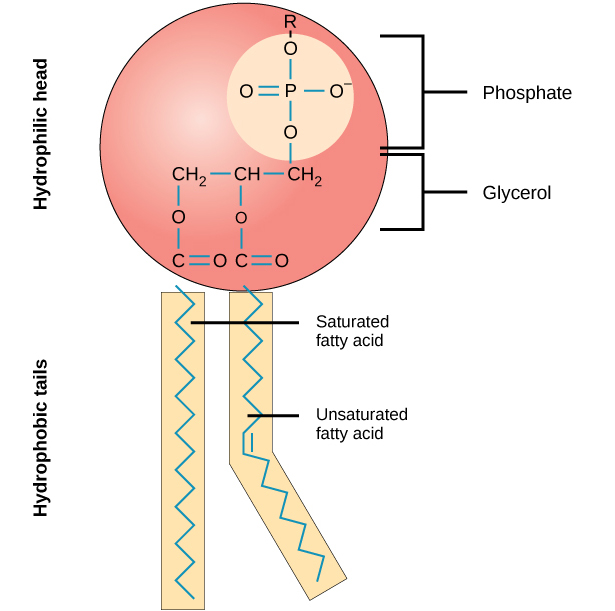 A phospholipid molecule (Figure 2) consists of a three-carbon glycerol backbone with two fatty acid molecules attached to carbons 1 and 2, and a phosphate-containing group attached to the third carbon.

This arrangement gives the overall molecule an area described as its head (the phosphate-containing group), which has a polar character or negative charge, and an area called the tail (the fatty acids), which has no charge. The head can form hydrogen bonds, but the tail cannot. A molecule with this arrangement of a positively or negatively charged area and an uncharged, or non-polar, area is referred to as amphiphilic or “dual-loving.”

This characteristic is vital to the structure of a plasma membrane because, in water, phospholipids tend to become arranged with their hydrophobic tails facing each other and their hydrophilic heads facing out. In this way, they form a lipid bilayer—a barrier composed of a double layer of phospholipids that separates the water and other materials on one side of the barrier from the water and other materials on the other side. In fact, phospholipids heated in an aqueous solution tend to spontaneously form small spheres or droplets (called micelles or liposomes), with their hydrophilic heads forming the exterior and their hydrophobic tails on the inside (Figure 3).

Figure 3. In an aqueous solution, phospholipids tend to arrange themselves with their polar heads facing outward and their hydrophobic tails facing inward. (credit: modification of work by Mariana Ruiz Villareal)