Structure of the Cell Membrane

A cell’s plasma membrane defines the cell, outlines its borders, and determines the nature of its interaction with its environment. Cells exclude some substances, take in others, and excrete still others, all in controlled quantities. The plasma membrane must be very flexible to allow certain cells, such as red and white blood cells, to change shape as they pass through narrow capillaries. These are the more obvious plasma membrane functions. In addition, the plasma membrane’s surface carries markers that allow cells to recognize one another, which is vital for tissue and organ formation during early development, and which later plays a role in the immune response’s “self” versus “non-self” distinction.

Among the most sophisticated plasma membrane functions is the ability for complex, integral proteins, receptors to transmit signals. These proteins act both as extracellular input receivers and as intracellular processing activators. These membrane receptors provide extracellular attachment sites for effectors like hormones and growth factors, and they activate intracellular response cascades when their effectors are bound. Occasionally, viruses hijack receptors (HIV, human immunodeficiency virus, is one example) that use them to gain entry into cells, and at times, the genes encoding receptors become mutated, causing the signal transduction process to malfunction with disastrous consequences.

The explanation, the fluid mosaic model, has evolved somewhat over time, but it still best accounts for plasma membrane structure and function as we now understand them. The fluid mosaic model describes the plasma membrane structure as a mosaic of components—including phospholipids, cholesterol, proteins, and carbohydrates—that gives the membrane a fluid character. Plasma membranes range from 5 to 10 nm in thickness. For comparison, human red blood cells, visible via light microscopy, are approximately 8 µm wide, or approximately 1,000 times wider than a plasma membrane. The membrane does look a bit like a sandwich (Figure 1).

A plasma membrane’s principal components are lipids (phospholipids and cholesterol), proteins, and carbohydrates attached to some of the lipids and proteins. A phospholipid is a molecule consisting of glycerol, two fatty acids, and a phosphate-linked head group. Cholesterol, another lipid comprised of four fused carbon rings, is situated alongside the phospholipids in the membrane’s core. The protein, lipid, and carbohydrate proportions in the plasma membrane vary with cell type, but for a typical human cell, protein accounts for about 50 percent of the composition by mass, lipids (of all types) account for about 40 percent, and carbohydrates comprise the remaining 10 percent. However, protein and lipid concentration varies with different cell membranes. For example, myelin, an outgrowth of specialized cells’ membrane that insulates the peripheral nerves’ axons, contains only 18 percent protein and 76 percent lipid. The mitochondrial inner membrane contains 76 percent protein and only 24 percent lipid. The plasma membrane of human red blood cells is 30 percent lipid. Carbohydrates are present only on the plasma membrane’s exterior surface and are attached to proteins, forming glycoproteins, or attached to lipids, forming glycolipids. 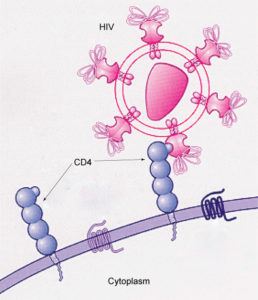 Glycoprotein and glycolipid patterns on the cells’ surfaces give many viruses an opportunity for infection. HIV and hepatitis viruses infect only specific organs or cells in the human body. HIV is able to penetrate the plasma membranes of a subtype of lymphocytes called T-helper cells, as well as some monocytes and central nervous system cells. The hepatitis virus attacks liver cells.

These viruses are able to invade these cells, because the cells have binding sites on their surfaces that are specific to and compatible with certain viruses (Figure 2). Other recognition sites on the virus’s surface interact with the human immune system, prompting the body to produce antibodies. Antibodies are made in response to the antigens or proteins associated with invasive pathogens, or in response to foreign cells, such as might occur with an organ transplant. These same sites serve as places for antibodies to attach and either destroy or inhibit the virus’ activity. Unfortunately, these recognition sites on HIV change at a rapid rate because of mutations, making an effective vaccine against the virus very difficult, as the virus evolves and adapts. A person infected with HIV will quickly develop different populations, or variants, of the virus that differences in these recognition sites distinguish. This rapid change of surface markers decreases the effectiveness of the person’s immune system in attacking the virus, because the antibodies will not recognize the surface patterns’ new variations. In the case of HIV, the problem is compounded because the virus specifically infects and destroys cells involved in the immune response, further incapacitating the host.

In Summary: Structure of the Cell Membrane