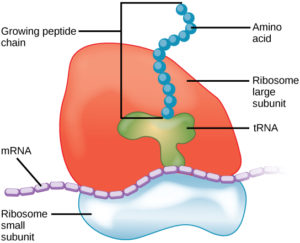 Figure 1. Ribosomes are made up of a large subunit (top) and a small subunit (bottom). During protein synthesis, ribosomes assemble amino acids into proteins.

Ribosomes are the cellular structures responsible for protein synthesis. When viewed through an electron microscope, ribosomes appear either as clusters (polyribosomes) or single, tiny dots that float freely in the cytoplasm. They may be attached to the cytoplasmic side of the plasma membrane or the cytoplasmic side of the endoplasmic reticulum and the outer membrane of the nuclear envelope. Electron microscopy has shown us that ribosomes, which are large complexes of protein and RNA, consist of two subunits, aptly called large and small (Figure 1). Ribosomes receive their “orders” for protein synthesis from the nucleus where the DNA is transcribed into messenger RNA (mRNA). The mRNA travels to the ribosomes, which translate the code provided by the sequence of the nitrogenous bases in the mRNA into a specific order of amino acids in a protein. Amino acids are the building blocks of proteins.

Because proteins synthesis is an essential function of all cells, ribosomes are found in practically every cell. Ribosomes are particularly abundant in cells that synthesize large amounts of protein. For example, the pancreas is responsible for creating several digestive enzymes and the cells that produce these enzymes contain many ribosomes. Thus, we see another example of form following function.

Mitochondria (singular = mitochondrion) are often called the “powerhouses” or “energy factories” of a cell because they are responsible for making adenosine triphosphate (ATP), the cell’s main energy-carrying molecule. ATP represents the short-term stored energy of the cell. Cellular respiration is the process of making ATP using the chemical energy found in glucose and other nutrients. In mitochondria, this process uses oxygen and produces carbon dioxide as a waste product. In fact, the carbon dioxide that you exhale with every breath comes from the cellular reactions that produce carbon dioxide as a byproduct.

In keeping with our theme of form following function, it is important to point out that muscle cells have a very high concentration of mitochondria that produce ATP. Your muscle cells need a lot of energy to keep your body moving. When your cells don’t get enough oxygen, they do not make a lot of ATP. Instead, the small amount of ATP they make in the absence of oxygen is accompanied by the production of lactic acid.

Mitochondria are oval-shaped, double membrane organelles (Figure 2) that have their own DNA and ribosomes (we’ll talk about these later!). Each membrane is a phospholipid bilayer embedded with proteins. The inner layer has folds called cristae. The area surrounded by the folds is called the mitochondrial matrix. The cristae and the matrix have different roles in cellular respiration.

Peroxisomes are small, round organelles enclosed by single membranes. They carry out oxidation reactions that break down fatty acids and amino acids. They also detoxify many poisons that may enter the body. Many of these oxidation reactions release hydrogen peroxide, H2O2, which would be damaging to cells; however, when these reactions are confined to peroxisomes, enzymes safely break down the H2O2 into oxygen and water. For example, alcohol is detoxified by peroxisomes in liver cells. Glyoxysomes, which are specialized peroxisomes in plants, are responsible for converting stored fats into sugars.