Hormonal Regulation of the Excretory System

Maintaining a proper water balance in the body is important to avoid dehydration or over-hydration (hyponatremia). The water concentration of the body is monitored by osmoreceptors in the hypothalamus, which detect the concentration of electrolytes in the extracellular fluid. The concentration of electrolytes in the blood rises when there is water loss caused by excessive perspiration, inadequate water intake, or low blood volume due to blood loss. An increase in blood electrolyte levels results in a neuronal signal being sent from the osmoreceptors in hypothalamic nuclei. The pituitary gland has two components: anterior and posterior. The anterior pituitary is composed of glandular cells that secrete protein hormones. The posterior pituitary is an extension of the hypothalamus. It is composed largely of neurons that are continuous with the hypothalamus.

The hypothalamus produces a polypeptide hormone known as antidiuretic hormone (ADH), which is transported to and released from the posterior pituitary gland. The principal action of ADH is to regulate the amount of water excreted by the kidneys. As ADH (which is also known as vasopressin) causes direct water reabsorption from the kidney tubules, salts and wastes are concentrated in what will eventually be excreted as urine. The hypothalamus controls the mechanisms of ADH secretion, either by regulating blood volume or the concentration of water in the blood. Dehydration or physiological stress can cause an increase of osmolarity above 300 mOsm/L, which in turn, raises ADH secretion and water will be retained, causing an increase in blood pressure. ADH travels in the bloodstream to the kidneys. Once at the kidneys, ADH changes the kidneys to become more permeable to water by temporarily inserting water channels, aquaporins, into the kidney tubules. Water moves out of the kidney tubules through the aquaporins, reducing urine volume. The water is reabsorbed into the capillaries lowering blood osmolarity back toward normal. As blood osmolarity decreases, a negative feedback mechanism reduces osmoreceptor activity in the hypothalamus, and ADH secretion is reduced. ADH release can be reduced by certain substances, including alcohol, which can cause increased urine production and dehydration.

Chronic underproduction of ADH or a mutation in the ADH receptor results in diabetes insipidus. If the posterior pituitary does not release enough ADH, water cannot be retained by the kidneys and is lost as urine. This causes increased thirst, but water taken in is lost again and must be continually consumed. If the condition is not severe, dehydration may not occur, but severe cases can lead to electrolyte imbalances due to dehydration.

Another hormone responsible for maintaining electrolyte concentrations in extracellular fluids is aldosterone, a steroid hormone that is produced by the adrenal cortex. In contrast to ADH, which promotes the reabsorption of water to maintain proper water balance, aldosterone maintains proper water balance by enhancing Na+ reabsorption and K+ secretion from extracellular fluid of the cells in kidney tubules. Because it is produced in the cortex of the adrenal gland and affects the concentrations of minerals Na+ and K+, aldosterone is referred to as a mineralocorticoid, a corticosteroid that affects ion and water balance. Aldosterone release is stimulated by a decrease in blood sodium levels, blood volume, or blood pressure, or an increase in blood potassium levels. It also prevents the loss of Na+ from sweat, saliva, and gastric juice. The reabsorption of Na+ also results in the osmotic reabsorption of water, which alters blood volume and blood pressure.

Aldosterone production can be stimulated by low blood pressure, which triggers a sequence of chemical release, as illustrated in Figure 1. When blood pressure drops, the renin-angiotensin-aldosterone system (RAAS) is activated. Cells in the juxtaglomerular apparatus, which regulates the functions of the nephrons of the kidney, detect this and release renin. Renin, an enzyme, circulates in the blood and reacts with a plasma protein produced by the liver called angiotensinogen. When angiotensinogen is cleaved by renin, it produces angiotensin I, which is then converted into angiotensin II in the lungs. Angiotensin II functions as a hormone and then causes the release of the hormone aldosterone by the adrenal cortex, resulting in increased Na+ reabsorption, water retention, and an increase in blood pressure. Angiotensin II in addition to being a potent vasoconstrictor also causes an increase in ADH and increased thirst, both of which help to raise blood pressure. 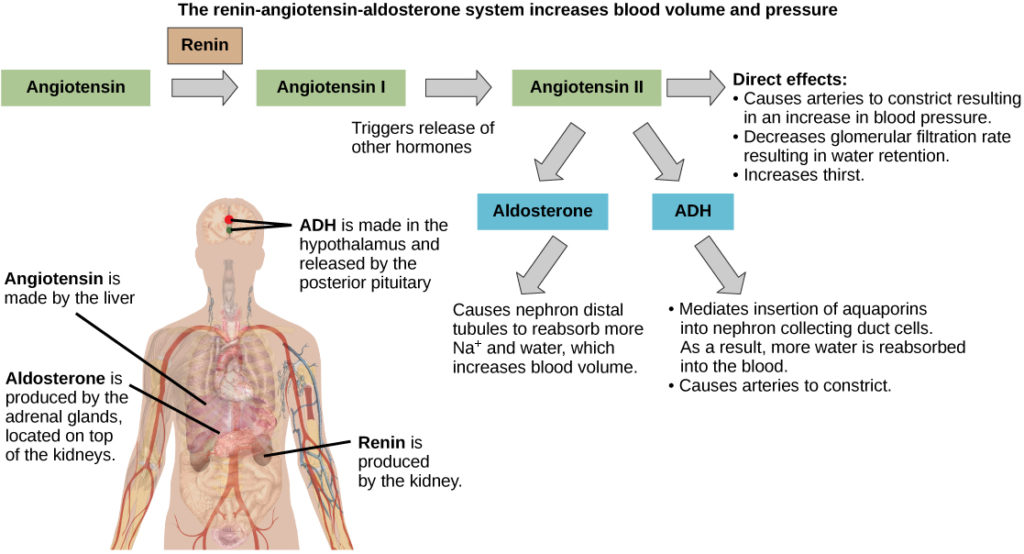 In summary: Hormonal Regulation of the Excretory System

Water levels in the body are controlled by antidiuretic hormone (ADH), which is produced in the hypothalamus and triggers the reabsorption of water by the kidneys. Underproduction of ADH can cause diabetes insipidus. Aldosterone, a hormone produced by the adrenal cortex of the kidneys, enhances Na+ reabsorption from the extracellular fluids and subsequent water reabsorption by diffusion. The renin-angiotensin-aldosterone system is one way that aldosterone release is controlled.