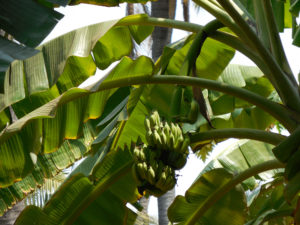 Consider the humble banana. Even if you’re not a big fan of this yellow fruit, you’ve surely seen them in the grocery store or in a market somewhere. If you walked through a US city with a banana and asked people to identify it, it’s unlikely you would encounter anyone who had no idea what it was. What if you did the same thing with a picture of a banana tree? How many people could identify it? Maybe some, but not all. Why is that? In the United States, bananas are grown in Hawaii, and not everyone has been to Hawaii. In fact, most of the bananas in the world are grown in Ecuador. If we Americans love bananas and don’t live in Hawaii and can’t get to Ecuador regularly, without global trade, we’re out of luck: no bananas for cereal in the morning or as snacks during the day and, worse, no banana splits at the local ice cream parlor. Why do Ecuador and Hawaii trade away their bananas instead of keeping them all to themselves? Probably because, although bananas are delicious and nutritious, it’s hard to build houses out of them. Instead, the state of Hawaii and nation of Ecuador choose to trade their bananas for things they lack, while considering the cost and profitability of exporting their product.

Ecuador and Hawaii offer an example of comparative advantage. Because bananas are not grown or readily available everywhere in the world, Ecuador and Hawaii can profitably export theirs to banana-less places like Iowa and Canada. At the same time, Ecuador may need computer systems to keep track of all of those bananas they are selling, but Ecuador is not a technologically advanced economy like the United States. The United States has a comparative advantage in computers, so we sell our computers to Ecuador and let them concentrate on selling us bananas.

In order to understand why businesses are willing to operate in a complex global environment, we must first understand two fundamental concepts that drive almost all business decisions: absolute and comparative advantage. Countries and companies are willing to assume the risk of engaging in global trade because they believe that they have an advantage over the competition that they can turn into profits. Not all countries have the same natural resources, infrastructure, labor force, or technology. These differences create advantages that can be exploited in global trade, to a country’s (or company’s) benefit.

An entity (country, region, company, or individual) is considered to have an absolute advantage if either of the following conditions exists:

An entity (country, region, company, or individual) is considered to have a comparative advantage over another in producing a particular good or service if it can produce the good or service at a lower relative opportunity cost.

You’ll recall from the economic environment module that opportunity cost is the value of the next best alternative. (The video, below, also includes a refresher on this concept.) Since countries and businesses have limited resources, they are forced to make choices about how they allocate those resources. As a student, you understand opportunity cost better than you think. You have a limited amount of time, and you must choose between reading this module and going out with your friends, because you can’t do both. If you choose to go out with your friends, then the opportunity cost might be a failure on your next exam because you did not use the time to prepare.

Ecuador has a comparative advantage in bananas over a long list of countries, including the United States. This comparative advantage is even better understood when you consider that their next best alternative product is oil. The Middle Eastern countries have been pumping oil from the ground for as long as Ecuador has been growing bananas. It makes as much sense for Kuwait to attempt to export bananas as it does for Ecuador to export oil. It’s the reality of comparative advantage that encourages countries and businesses to do what they do best—leaving the production of other goods and services to other countries or companies—and in so doing, focusing on producing goods and services where they have advantage, thus maximizing their opportunities in a global environment.

The following video provides an excellent illustration of comparative and absolute advantage and explains why they are such important considerations in how countries decide to specialize and trade.

It’s one thing to talk and read about global business and another to actually engage in global trade. The following interactive provides a brief introduction to doing just that, with a focus on just how countries behave to create a more productive global economy.