Theoretical Perspectives of Race and Ethnicity

Scholars in the 1950s produced a number of theories addressing racial, ethnic, and nationalist prejudices in the aftermath of the Holocaust. Some of these were psychological theories, which focused on how an individual may come to develop, or not develop, prejudices. In his book, The Authoritarian Personality (1950), Theodor Adorno concluded that excessively strict authoritarian parenting caused children to feel immense anger towards their parents, but instead of confronting their parents, they idolized authority figures. Adorno said this led to increased levels of prejudice and the likelihood for these people to feel more connected to what he called the “F-scale,” (a pre-fascist personality), or to right-wing ideologies.

Psychologist Gordon Allport developed the contact hypothesis or intergroup contact theory in the 1950s, which posits if two groups with equal status and common goals come together, with cooperation, structural supports (i.e., existing laws or customs), and interpersonal communication, they can reduce stereotypes, prejudices, and discrimination.

According to Henri Tajfel’s social identity theory (1979), people examine their own identity in light of perceived group membership. He says that we tend to increase our self-image by enhancing the status of the group to which we belong. Therefore, we divide the world into “them” and “us” or in-groups and out-groups with heightened prejudicial attitudes toward the out-groups.

Functionalism emphasizes that all the elements of society have functions that promote solidarity and maintain order and stability in society. Hence, we can observe people from various racial and ethnic backgrounds interacting harmoniously in a state of social balance. Problems arise when one or more racial or ethnic groups experience inequalities and discriminations. This creates tension and conflict resulting in temporary dysfunction of the social system. For example, the killing of a Black man George Floyd by a White police officer in 2020 stirred up protests demanding racial justice and changes in policing in the United States. To restore the society’s pre-disturbed state or to seek a new equilibrium, the police department and various parts of the system require changes and compensatory adjustments.

Another way to apply the functionalist perspective to race and ethnicity is to discuss the way racism can contribute positively to the functioning of society by strengthening bonds between in-group members (dominant group) through the ostracism of out-group members (minority group members). Consider how a community might increase solidarity by refusing to allow outsiders access. For example, gated communities or neighborhoods with covenants might include no-rent clauses, which can have a de facto (in fact) discriminatory effect although they are not du jure (by law) discriminatory. Additionally, “Not in My Backyard” or NIMBY groups often are effective at limiting developments that could be viewed as reducing one’s property value. These movements and restrictive covenants are also “inescapably, about race”[1]

Dysfunctions associated with racism include the failure to take advantage of talent in the subjugated group, and that society must divert from other purposes the time and effort needed to maintain artificially constructed racial boundaries (Rose 1951). Imagine the talent that is lost in minority areas with poor public schools and few job opportunities and then consider how much money, time, and effort went toward maintaining separate and unequal educational systems prior to the Civil Rights Movement. Consider the $1 trillion spent on the “War on Drugs” over the past four decades, which has resulted in disproportionate numbers of racial minorities being locked up for nonviolent drug offenses, which costs society not only talent and productive taxpayers, but also vast amounts of taxpayer money to expand and operate jails and prisons.

In the view of functionalism, racial and ethnic inequalities must have served an important function in order to exist as long as they have. This concept, sometimes, can be problematic. How can racism and discrimination contribute positively to society? Nash (1964) focused his argument on the way racism is functional for the dominant group, for example, suggesting that racism morally justifies a racially unequal society. Consider the ways in which slave owners justified slavery in the antebellum South, by suggesting Black people were fundamentally inferior to whites, that they preferred slavery to freedom, that many were “like family,” and/or that the Bible justified slavery. Today, we can look at how people explain or justify racial inequalities in the criminal justice system (“Black and Brown men commit more crimes”) or racially segregated neighborhoods (“people choose where they live”) or shooting of unarmed people of color (“they appeared threatening” or “I was protecting myself or my neighborhood”).

Conflict theories are often applied to inequalities of gender, social class, education, race, and ethnicity. A conflict theorist would examine struggles between the white ruling class and racial and ethnic minorities and use that history to analyze everyday life for racial and ethnic minorities in the U.S., paying special attention to power and inequality. Prejudice is a tool for maintaining power, and in many cases throughout U.S. history, prejudicial policies have become laws. The years since the Civil War have showed a pattern of attempted disenfranchisement, with gerrymandering (redrawing congressional districts to favor one political party over another) and voter suppression efforts, such as voter ID laws, aimed at predominantly minority neighborhoods. In the late nineteenth century, the rising political power of Blacks after the Civil War resulted in draconian Black Codes and Jim Crow laws that severely limited Black political and social power.

Vivien Thomas (1910–1985), the Black surgical technician who helped develop a groundbreaking technique that saves the lives of “blue babies,” was classified as a janitor for many years, and was paid as such, despite the fact that he was conducting complicated surgical experiments. The popular film Hidden Figures (2016) shed light on the unrecognized work that Black women did for NASA during the Space Race in the 1960s. It highlights many of the institutional discriminations that women of color faced, like being denied admission to study calculus and advanced mathematics, being overlooked for supervisory roles, and suffering the effects of Jim Crow segregation in the workplace.

As discussed in the opening module, W.E.B. DuBois was one of the first sociologists to examine race and double consciousness (the feeling that one’s identity is divided because of race) and how that influences the sense of self. For symbolic interactionists, race and ethnicity provide strong symbols as sources of identity.

In fact, some interactionists propose that the symbols of race, not race itself, are what lead to racism. Famed Interactionist Herbert Blumer (1958) suggested that racial prejudice is formed through interactions between members of the dominant group; without these interactions, individuals in the dominant group would not hold racist views. These interactions contribute to an abstract picture of the subordinate group that allows the dominant group to support its view of the subordinate group, and thus maintains the status quo. An example of this might be an individual whose beliefs about a particular group are based on images encountered through popular media, which are then unquestionably believed because the individual has never personally met a member of that group.

Another way to apply the interactionist perspective is to look at how people define their races and the race of others. As we discussed in relation to the social construction of race, did Latinos “become White” because the Census removed the Hispanic category as a race? Are Arab-Americans White? What does it mean to be biracial? We discussed that President Obama is considered the “first Black President” and sometimes the “first African American President” even though his mother was white, his father was Kenyan, and the 44th President of the United States grew up surrounded by Hawaiian and Asian culture in Honolulu.

Sociologists like Kathleen Blee have studied racism (Blee studied women in hate groups) and found that racism is learned. This is supported by other social psychology experiments, and Blee reached her conclusions by conducting life history interviews with women in white supremacist groups. She found that most women were not racist when they joined the group; rather, they learned to be racist.

Feminist sociologist Patricia Hill Collins (1990) elaborated on ideas related to the inseparability of various social characteristics in intersection theory, or intersectionality. The term was first used by Columbia Law Professor Kimberlé Crenshaw in a 1980 paper to describe the oppression of Black women and how their experiences during the feminist movement were uniquely different from the mainstream feminist movement, which mostly represented middle-class white women. Intersection theory suggests we cannot separate the effects of race, class, gender, sexual orientation, and other attributes. When we examine race and how it can bring us both advantages and disadvantages, it is important to acknowledge that the way we experience race is shaped, for example, by our gender and class. Multiple layers of disadvantage intersect to create the way we experience race. For example, if we want to understand prejudice, we must understand that the prejudice focused on a white woman because of her gender is very different from the layered prejudice focused on a poor Asian woman, who is affected by stereotypes related to being poor, being a woman, and to her ethnic status. 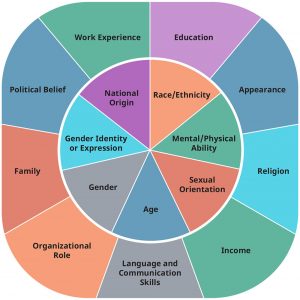 Figure 1. Our identities are formed by dozens of factors, sometimes represented in intersection wheels. Consider the subset of identity elements represented here. Generally, the outer ring contains elements that may change relatively often, while the elements in the inner circle are often considered more permanent. (There are certainly exceptions.) How does each contribute to who you are, and how would possible change alter your self-defined identity?

Culture of prejudice refers to the theory that prejudice is embedded in our culture. We grow up surrounded by images of stereotypes and casual expressions of racism and prejudice. Consider the casually racist imagery on grocery store shelves or the stereotypes that fill popular movies and advertisements. It is easy to see how someone living in the Northeastern United States, who may not know any Mexican Americans personally, might gain a stereotyped impression from such sources as Speedy Gonzalez or Taco Bell’s talking Chihuahua. Because we are all more or less exposed to these images and thoughts, it is impossible to know to what extent they have influenced our thought processes.

contact hypothesis:
Gordon Allport’s theory that emphasizes the importance of interpersonal communication in reducing stereotypes, prejudices, and discrimination
culture of prejudice:
the theory that prejudice is embedded in our culture
double consciousness:
the feeling that one’s identity is divided because of race
intersection theory:
theory that suggests we cannot separate the effects of race, class, gender, sexual orientation, and other attributes
social identity theory:
people examine their own identity as based on group membership (in-groups and out-groups)