In the 1820s, American political culture gave way to the democratic urges of the citizenry. Political leaders and parties rose to popularity by championing the will of the people, pushing the country toward a future in which a wider swath of citizens gained a political voice. However, this expansion of political power was limited to White men; women, free Blacks, and Indigenous people remained or grew increasingly disenfranchised by the American political system.

Democracy in the Early Republic

Today, most Americans think democracy is a good thing. We tend to assume the nation’s early political leaders believed the same. Wasn’t the American Revolution a victory for democratic principles? For many of the founders, however, the answer was no.

A wide variety of people participated in early U.S. politics, especially at the local level. But ordinary citizens’ growing direct influence on government frightened the founding elites. At the Constitutional Convention in 1787, Alexander Hamilton warned of the “vices of democracy” and said he considered the British government—with its powerful king and parliament—“the best in the world.”[1] Another convention delegate, Elbridge Gerry of Massachusetts, who eventually refused to sign the finished Constitution, agreed. “The evils we experience flow from an excess of democracy,” he proclaimed.[2]

Too much participation by the multitudes, the elite believed, would undermine good order. It would prevent the creation of a secure and united republican society. The Philadelphia physician and politician Benjamin Rush, for example, sensed that the Revolution had launched a wave of popular rebelliousness that could lead to a dangerous new type of despotism. “In our opposition to monarchy,” he wrote, “we forgot that the temple of tyranny has two doors. We bolted one of them by proper restraints; but we left the other open, by neglecting to guard against the effects of our own ignorance and licentiousness.”[3]

Such warnings did nothing to quell Americans’ democratic impulses in the late eighteenth and early nineteenth centuries. Americans who were allowed to vote (and sometimes those who were not) went to the polls in impressive numbers. Citizens also made public demonstrations. They delivered partisan speeches at patriotic holiday and anniversary celebrations. They petitioned Congress, openly criticized the president, and insisted that a free people should not defer even to elected leaders. In many people’s eyes, the American republic was a democratic republic: the people were sovereign all the time, not only on election day.

The elite leaders of political parties could not afford to overlook “the cultivation of popular favour,” as Alexander Hamilton put it.[4] Between the 1790s and 1830s, the elite of every state and party learned to listen—or pretend to listen—to the voices of the multitude. And ironically, an American president, holding the office that most resembles a king’s, would come to symbolize the democratizing spirit of American politics.

The Decline of Federalism

Before the 1820s, a code of deference had underwritten the republic’s political order. Deference was the practice of showing respect for individuals who had distinguished themselves through military accomplishments, educational attainment, business success, or family pedigree. Such individuals were members of what many Americans in the early republic agreed was a natural aristocracy. Deference shown to them dovetailed with republicanism and its emphasis on virtue, the ideal of placing the common good above narrow self-interest. Republican statesmen in the 1780s and 1790s expected and routinely received deferential treatment from others, and ordinary Americans deferred to their “social betters” as a matter of course. 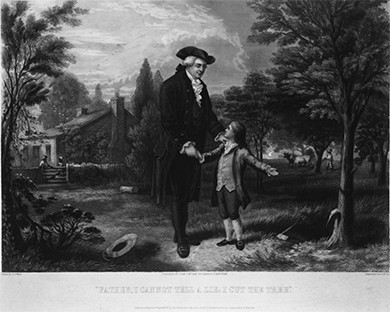 Figure 2. “Father, I Can Not Tell a Lie: I Cut the Tree” (1867) by John McRae, after a painting by George Gorgas White, illustrates Mason Locke Weems’s tale of Washington’s honesty and integrity as revealed in the incident of the cherry tree. Although it was fiction, this story about Washington taught generations of children about the importance of virtue.

For the generation who lived through the American Revolution, for instance, George Washington epitomized republican virtue, entitling him to great deference from his countrymen. His judgment and decisions were considered beyond reproach. An Anglican minister named Mason Locke Weems wrote the classic tale of Washington’s unimpeachable virtue in his 1800 book, The Life of Washington. Generations of nineteenth-century American children read its fictional story of a youthful Washington chopping down one of his father’s cherry trees and, when confronted by his father, confessing: “I cannot tell a lie.” The story spoke to Washington’s unflinching honesty and integrity, encouraging readers to remember the deference owed to such towering national figures.

Washington and those who celebrated his role as president established a standard for elite, virtuous leadership that cast a long shadow over subsequent presidential administrations. The presidents who followed Washington shared the first president’s pedigree. With the exception of John Adams, who was from Massachusetts, all the early presidents—Thomas Jefferson, James Madison, and James Monroe—were members of Virginia’s elite slaveholder aristocracy.

In the early 1820s, deference to pedigree began to wane in American society. A new type of deference—to the will of the majority and not to a ruling class—took hold. The spirit of democratic reform became most evident in the widespread belief that all White men, regardless of whether they owned property, had the right to participate in elections.

Before the 1820s, many state constitutions had imposed property qualifications for voting as a means to keep democratic tendencies in check. However, as Federalist ideals fell out of favor, ordinary men from the middle and lower classes increasingly questioned the idea that property ownership was an indication of virtue. They argued for universal manhood suffrage, or voting rights for all White male adults.

New states adopted constitutions that did not contain property qualifications for voting, a move designed to stimulate migration across their borders. Vermont and Kentucky, admitted to the Union in 1791 and 1792 respectively, granted the right to vote to all White men regardless of whether they owned property or paid taxes. Ohio’s state constitution placed a minor taxpaying requirement on voters but otherwise allowed for expansive White male suffrage. Alabama, admitted to the Union in 1819, eliminated property qualifications for voting in its state constitution. Two other new states, Indiana (1816) and Illinois (1818), also extended the right to vote to White men regardless of property. Initially, the new state of Mississippi (1817) restricted voting to White male property holders, but in 1832 it eliminated this provision.

In Connecticut, Federalist power largely collapsed in 1818 when the state held a constitutional convention. The new constitution granted the right to vote to all White men who paid taxes or served in the militia. Similarly, New York amended its state constitution in 1821–1822 and removed the property qualifications for voting.

Expanded voting rights did not extend to women, Indigenous peoples, or free Black people in the North. Indeed, race replaced property qualifications as the criterion for voting rights. Early American democracy had a decidedly racist orientation; a White majority limited the rights of Black minorities. New Jersey explicitly restricted the right to vote to White men only. Connecticut passed a law in 1814 taking the right to vote away from free Black men and restricting suffrage to White men only. By the 1820s, 80 percent of the White male population could vote in New York State elections. No other state had expanded suffrage so dramatically. At the same time, however, New York effectively disenfranchised free Black men in 1822 (Black men had had the right to vote under the 1777 constitution) by requiring that “men of color” must possess property over the value of $250.

code of deference: the practice of showing respect for individuals who had distinguished themselves through accomplishments or birth