Even as electoral influence was being constrained among different categories of potential voters, another troubling pattern was also emerging in national politics and culture. During the first decades of the nineteenth century, American politics shifted toward “sectional” conflict among the states of the North, South, and West.

Since the ratification of the Constitution in 1789, the state of Virginia had wielded more influence on the federal government than any other state. Four of the first five presidents, for example, were from Virginia. Immigration caused by the market revolution, however, caused the country’s population to grow fastest in northern states like New York. Northern political leaders were becoming wary of what they perceived to be a disproportionate influence in federal politics by Virginia and other southern states.

Furthermore, many northerners feared that the southern states’ common interest in protecting slavery was creating a congressional voting bloc that would be difficult for “free states” to overcome. The North and South began to clash over federal policy as northern states gradually ended slavery but southern states came to depend even more on enslaved labor.

The most important instance of these rising tensions erupted in the Missouri Crisis. When White settlers in Missouri, a new territory carved out of the Louisiana Purchase, applied for statehood in 1819, the balance of political power between northern and southern states became the focus of public debate. Missouri already had more than ten thousand enslaved laborers and was poised to join the southern slave states in Congress.

The Missouri territory was gained through the Louisiana Purchase, and was the first part of that vast acquisition to apply for statehood. By 1818, tens of thousands of settlers had flocked to Missouri, including enslavers who brought with them some ten thousand enslaved persons. Politicians had sought to avoid the issue of slavery ever since the 1787 Constitutional Convention arrived at an uneasy compromise in the form of the “three-fifths clause.” This provision stated that the entirety of a state’s free population and 60 percent of its enslaved population would be counted in establishing the number of that state’s members in the House of Representatives and the size of its federal tax bill. Although slavery existed in several northern states at the time, the compromise had angered many northern politicians because, they argued, the “extra” population of slaves would give southern states more votes than they deserved in both the House and the Electoral College. Admitting Missouri as a slave state also threatened the tenuous balance between free and slave states in the Senate by giving slave states a two-vote advantage.

Accordingly, Congressman James Tallmadge of New York proposed an amendment to Missouri’s application for statehood. Tallmadge claimed that the institution of slavery mocked the Declaration of Independence and the liberty it promised to “all men.” He proposed that Congress should admit Missouri as a state only if bringing more enslaved people to Missouri were prohibited and children born to those enslaved there were freed at age twenty-five.

Congressmen like Tallmadge opposed slavery for moral reasons, but they also wanted to maintain a sectional balance of power. Unsurprisingly, the Tallmadge Amendment met with firm resistance from southern politicians. It passed in the House of Representatives because of the support of nearly all the northern congressmen, who had a majority there, but it was quickly defeated in the Senate.

Southerners in Congress rejected the amendment as an attempt to gradually abolish slavery—not just in Missouri but throughout the Union—by violating the property rights of enslavers and their freedom to take their property wherever they wished. Slavery’s apologists, who had long argued that slavery was a necessary evil, now began to perpetuate the idea that slavery was a positive good for the United States. They asserted that it generated wealth and left White men free to exercise their true talents instead of toiling in the soil, as the descendants of Africans were allegedly better suited to do. Enslaved people were cared for, supporters argued, and were better off for being exposed to the teachings of Christianity as enslaved persons than living as free heathens in uncivilized Africa. Above all, the United States had a destiny, they argued, to create an empire of slavery throughout the Americas. These proslavery arguments were to be made repeatedly and forcefully as expansion to the West proceeded and would become increasingly problematic.

When Congress reconvened in 1820, a senator from Illinois, another new western state, proposed a compromise. Jesse Thomas hoped his offer would not only end the Missouri Crisis but also prevent any future sectional disputes over slavery and statehood. Senator Henry Clay of Kentucky joined in promoting the deal, earning himself the nickname “the Great Compromiser.” 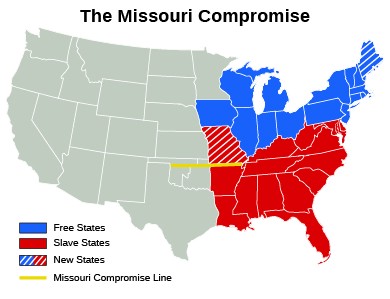 Figure 1. The Missouri Compromise resulted in the District of Maine, which had originally been settled in 1607 by the Plymouth Company and was a part of Massachusetts, being admitted to the Union as a free state and Missouri being admitted as a slave state.

Their bargain, the Missouri Compromise of 1820, contained three parts.

The compromise passed both houses of Congress, and the Missouri Crisis ended peacefully. Not everyone, however, felt relieved. The Missouri Crisis made the sectional nature of American politics impossible to ignore. The Missouri Crisis split the Democratic-Republican party entirely along sectional lines, revealing the different levels of regional economic dependency on the system of slavery that now existed and suggesting trouble to come.

The Missouri Crisis demonstrated the emerging volatility of the slavery debate. Many Americans, including seventy-seven-year-old Thomas Jefferson, were alarmed at how readily some Americans spoke of disunion and even civil war over the issue. “This momentous question, like a fire bell in the night, awakened and filled me with terror,” Jefferson wrote. “I considered it at once as the [death] knell of the Union.”[1]

Thomas Jefferson on the Missouri Crisis

On April 22, 1820, Thomas Jefferson wrote to John Holmes to express his reaction to the Missouri Crisis, especially the open threat of disunion and war:

I thank you, Dear Sir, for the copy you have been so kind as to send me of the letter to your constituents on the Missouri question. it is a perfect justification to them. I had for a long time ceased to read the newspapers or pay any attention to public affairs, confident they were in good hands, and content to be a passenger in our bark to the shore from which I am not distant. but this momentous question [over slavery in Missouri], like a fire bell in the night, awakened and filled me with terror. I considered it at once as the knell of the Union. it is hushed indeed for the moment. but this is a reprieve only, not a final sentence. a geographical line, coinciding with a marked principle, moral and political, once concieved [sic] and held up to the angry passions of men, will never be obliterated; and every new irritation will mark it deeper and deeper. I can say with conscious truth that there is not a man on earth who would sacrifice more than I would, to relieve us from this heavy reproach, in any practicable way. . . .

I regret that I am now to die in the belief that the useless sacrifice of themselves, by the generation of 76. to acquire self government and happiness to their country, is to be thrown away by the unwise and unworthy passions of their sons, and that my only consolation is to be that I live not to weep over it. if they would but dispassionately weigh the blessings they will throw away against an abstract principle more likely to be effected by union than by scission, they would pause before they would perpetuate this act of suicide themselves and of treason against the hopes of the world. to yourself as the faithful advocate of union I tender the offering of my high esteem and respect.

How would you characterize the former president’s reaction? What do you think he means by writing that the Missouri Compromise line “is a reprieve only, not a final sentence”?

You can access a collection of primary documents relating to the Missouri Compromise, including Missouri’s application for admission into the Union and Jefferson’s correspondence on the Missouri question, at the Library of Congress website.

For now, the Missouri Crisis did not result in disunion and civil war as Jefferson and others feared. But it also failed to settle the issue of slavery’s expansion into new western territories. The issue would cause worse trouble in the years ahead.

This video explains the compromise of 1820. The Compromise included plans to divide the country along the 36th parallel so that any new states west of the Mississippi would be a slave state if below the line or a free state if above that line.

You can view the transcript for “The Missouri Compromise” here (opens in new window).

Why did the Missouri Crisis trigger threats of disunion and war? Identify the positions of both southern slaveholders and northern opponents of the spread of slavery.

Show Answer
Northern politicians disliked the terms of the Missouri Compromise because it allowed the expansion of slavery into the lands acquired in the Louisiana Purchase. They feared this would lead to the West being dominated by slaveholders. Southerners disliked the compromise because it prohibited people from taking their slaves into the territory north of 36° 30′ latitude, which they believed was a violation of their property rights.

Missouri Compromise: an 1820 Congressional agreement that allowed Missouri to enter the Union as a slave state, brought Maine into the Union as a free state, and prohibited slavery north of 36° 30′ latitude while allowing it in new states below that line

Tallmadge Amendment: an amendment (which did not pass) proposed by Representative James Tallmadge in 1819 that called for Missouri to be admitted as a free state and for all slaves there to be gradually emancipated