Although damaged by the problems of Jefferson’s second term, the Democratic-Republicans still managed to win the White House once again in the election of 1808, placing James Madison, another Virginian and close confidant of Jefferson, in the presidency. Jefferson retired to his estate, Monticello, while Madison was left to find a solution to the ongoing conflict with Britain and France that had so vexed Jefferson.

As Jefferson’s Secretary of State, James Madison did not have success in convincing the French and British to leave Americans alone. Now as president, his role had changed, but the problems he faced were still the same. Although neither France nor Britain wanted to harm the United States, neither cared what damage they inflicted on the Americans as long as they were able to continue fighting one another. America could not avoid the conflict; Madison had to try something new. The previous attempt to use economics had not only failed but had unintentionally harmed the United States. In place of the Embargo Act, Madison began his presidency with the Nonintercourse Act, which allowed American trading with all nations excepting France and Great Britain. In practice, this move was little better than the previous Embargo Act, and the economy still suffered.

On May 1, 1810, a new plan, Macon’s Bill Number 2, was put forward by Congress. It opened trade again with whichever nation was first to recognize American neutrality and cease attacking American ships while refusing trade with the other warring nation. Madison did not like the plan, but since Congress passed the bill, he had to enforce it. Napoleon Bonaparte of France quickly accepted the terms. For Napoleon, it marked an opportunity to offend the British and hopefully cause them some economic damage at the same time. It worked to a certain extent. The British were offended, worsening their already tense relations with the Americans. The economic impact, though, never manifested.

Meanwhile, Madison faced a war with the Indians of the Northwest. Many Indigenous leaders of the tribes in the Northwest had tried to adapt to the American ways. They signed treaties ceding lands in Ohio and Indiana to the United States, thus allowing for American settlers to move in and slowly expand American territory. These chiefs who supported peace with the United States dominated the Indians of the area, such as the Shawnee, Miami, and Lenape, until 1805 when smallpox and influenza swept through the tribes. Among the dead was a Lenape leader, Buckongahelas, who had led his tribe from Delaware to Indiana to escape American expansion years before. He and others like him did not trust the Americans and did not want contact with them, due in part to the history of violent conflict between the two peoples. With the death of Buckongahelas, new leaders rose from the tribes in the region, including two brothers from the Shawnee: Tenskwatawa, also known as The Prophet, and his brother Tecumseh.

Tenskwatawa and Tecumseh both were opposed to the Americans and what they saw as an unhealthy American influence on their people. Tenskwatawa had himself been a heavy drinker before having a transformative experience during the time of illness in 1805. From then on, he began to promote a return to the old ways, following strictly Indian customs, promoting Indian culture, and rejecting American, or “White,” things such as alcohol. As the brothers rose to prominence and attracted followers, they created problems for the nearby Indians who were pro-American and who were trying to peacefully co-exist with the settlers.

Tecumseh’s confederacy drew heavily from indigenous communities in the Old Northwest as he capitalized upon a festering hatred for the land-hungry American republic. Tecumseh attracted a wealth of allies in his adamant refusal to concede any more land to the republic, in a sense professing a pan-Indian sovereignty that eluded Native communities during the eighteenth-century. Tecumseh proclaimed that the Master of Life tasked him with the responsibility of returning Native lands to their rightful owners. In his efforts to promote unity among Native peoples, Tecumseh also offered these communities a distinctly “Indian identity” that brought disparate Native peoples together under the banner of a common spirituality, together resisting an oppressive force. In short, the spiritual underpinnings of Tecumseh’s confederacy provided the cohesive glue to the diverse communities that comprised Tecumseh’s resistance movement.

In 1808 the brothers and their followers were forced to move further toward the northwest into lands inhabited by other tribes in Indiana. They established Prophetstown on the Wabash River where it joins the Tippecanoe River, south of Lake Michigan and not far from the Indiana-Illinois border. The village was named after Tenskwatawa, who was seen as a prophet by many who believed in his spiritual/cultural revival. This time was one of great trouble for the Indians of the area. Deadly bouts of illness continued to occur, bringing misery to the tribes. Many remained pro-American or pro-British, wanting to trade with and learn to live with the Whites, while others were drawn to Tenskwatawa. The differences of opinion crossed tribal lines, creating a sense of uneasiness both for the Indians and American settlers of the area. These White settlers were concerned about the growing influence of Tenskwatawa and his anti-White view. Still more settlers were ready to move into the fertile lands, and in 1809, William Henry Harrison negotiated the Treaty of Fort Wayne, in which he purchased millions of acres of land from the Indians of the area. The Indians were not all in agreement about the sale, a fact that added to the troubles.

Tenskwatawa and his followers were particularly determined in their opposition to the sale. Tecumseh, who was emerging from his brother’s shadow, was outraged. He argued that no one tribe owned the land and so no tribe could sell it unless all Indian tribes agreed to the sale. Harrison had been successful in negotiating the sale because he was able to get several tribes to agree to it, in part by getting one tribe to persuade others until enough had agreed and the sale went forward. Tecumseh spoke of killing the chiefs who had signed the treaty and of killing Harrison as well. 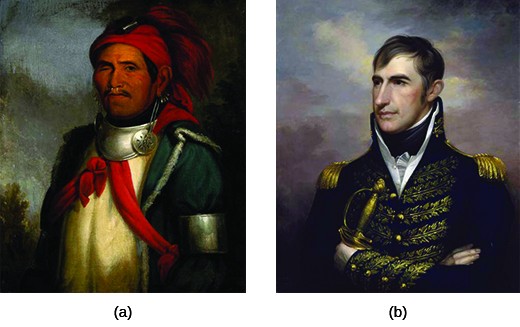 Figure 1. Portrait (a), painted by Charles Bird King in 1820, is a depiction of Shawnee prophet Tenskwatawa. Portrait (b) is Rembrandt Peele’s 1813 depiction of William Henry Harrison. What are the significant similarities and differences between the portraits? What was each artist trying to convey?

The Battle of Tippecanoe

By 1811, Prophetstown’s population had grown to around 3,000 Indians from various tribes of the Algonquian group, including Shawnee, Winnebago, Iroquois, Kickapoo, Sauk, Fox, and Potawatomi, among others. With Tecumseh and Tenskwatawa actively opposing the Americans, Harrison had to act. He led a force to Prophetstown in November, 1811. At this time, Tecumseh was away in the South, encouraging the Creeks and others to rise against the Americans. While Harrison said he wanted to negotiate with Tenskwatawa, and Tenskwatawa said he wanted to meet with Harrison, both were prepared for a fight. Tenskwatawa struck first but was defeated. He was not a military leader, unlike his brother, but a spiritual one. While his followers attacked the Americans, Tenskwatawa prayed for their safety and victory. When they lost, he was blamed and denounced by his own followers, who believed that he did not have the spiritual powers he had claimed. Prophetstown was burned by the Americans, and Tenskwatawa was abandoned by his followers. This event was the Battle of Tippecanoe and was hailed by the Americans as a great victory for Harrison. In reality, it was not so much the military victory but rather the destruction of the Indian alliance that followed Tenskwatawa that proved significant. Harrison would later successfully run for president with the slogan, “Tippecanoe and Tyler Too.” Although Tenskswatawa was disgraced, Tecumseh’s reputation and influence continued to grow as he worked to create an Indian alliance to resist the Americans. He fought on, becoming an ally of the British. The Indian conflicts with the Americans that he encouraged would become part of the War of 1812.

Native Americans in the South

While Tecumseh attracted Native peoples from around the Northwest and some from the Southeast, the Red Stick Creeks brought these ideas to the Southeast. Led by the Creek prophet Hillis Hadjo, who accompanied Tecumseh when he toured the Southeast in 1811, the Red Sticks integrated certain religious tenets from the north and invented new religious practices specific to the Creeks, all the while communicating and coordinating with Tecumseh after he left Creek lands. In doing so, the Red Sticks joined Tecumseh in his resistance movement while seeking to purge Creek society of its Euro-American dependencies. Creek leaders who maintained relationships with the United States in contrast believed that accommodation and diplomacy might stave off American encroachments better than violence.

Additionally, the Red Sticks discovered that most southeastern Indigenous leaders cared little for Tecumseh’s confederacy. This lack of allies hindered the spread of a movement in the southeast, and the Red Sticks soon found themselves in a civil war against other Creeks. Tecumseh thus found little support in the Southeast beyond the Red Sticks, who by 1813 were cut off from the North by Andrew Jackson. Shortly thereafter, Jackson’s forces were joined by Lower Creek and Cherokee forces that helped defeat the Red Sticks, culminating in Jackson’s victory at the Battle of Horseshoe Bend. Following their defeat, the Red Sticks were forced to cede an unprecedented fourteen million acres of land in the Treaty of Fort Jackson. As historian Adam Rothman argues, the defeat of the Red Sticks allowed the United States to expand west of the Mississippi, guaranteeing the continued existence and profitability of slavery.

Similar to the Red Sticks, Tecumseh found that many Native leaders refused to join him and maintained their loyalties to the American republic, which diminished the potential for a truly pan-Indian resistance movement. After the failures of Native American unity and loss at the Battle of Tippecanoe in 1811, Tecumseh’s confederation floundered, though he fought on, becoming an ally of the British. The Indian conflicts with the Americans that he encouraged would become part of the War of 1812. With the United States distracted, Tecumseh and his army seized several American forts on their own initiative. Eventually, Tecumseh solicited British aid after sustaining heavy losses from American fighters at Fort Wayne and Fort Harrison. Even then, the confederacy faced an uphill battle, particularly after American naval forces secured control of the Great Lakes in September 1813, forcing British ships and reinforcements to retreat. Yet Tecumseh and his Native allies fought on despite being surrounded by American forces. Tecumseh told the British commander Henry Proctor, “Our lives are in the hands of the Great Spirit. We are determined to defend our lands, and if it is his will, we wish to leave our bones upon them.”[1] Tecumseh later fell on the battlefields of Moraviantown, Ontario, in October 1813. His death dealt a severe blow to Native American resistance against the United States. Men like Tecumseh, however, left behind a legacy of Native American unity that was not soon forgotten.

Battle of Tippecanoe: American victory over Native Americans in Indiana that broke the alliance led by Tenskwatawa