Creation of the Confederacy

The Creation of the Confederate States of America

The seven Deep South states that seceded quickly sought to establish a new government built upon around a core identity known as Confederate nationalism. Confederate nationalism was based on several ideals, foremost among these being the protection of slavery. Slavery was omnipresent in the prewar South, and it served as the most common frame of reference for unequal power. To a southern White man, no matter his socioeconomic standing, there was no fate more terrifying than the thought of being reduced to the level of an enslaved person. As Confederate vice president Alexander Stephens stated, the Confederacy’s “foundations are laid, its cornerstone rests, upon the great truth that the negro is not equal to the white man; that slavery . . . is his natural and normal condition.”[1]

Religion likewise shaped Confederate nationalism, as southerners believed that the Confederacy was fulfilling God’s will. The Confederacy even veered from the American Constitution by explicitly invoking Christianity in their founding document. Yet in every case, all rationale for secession could be thoroughly tied to slavery. “Our position is thoroughly identified with the institution of slavery—the greatest material interest of the world,” proclaimed the Mississippi statement of secession. Thus, slavery’s existence was the essential core of the fledging Confederacy, and they sought to write their own governing document that would both protect slavery where it already operated and allow for its growth into new lands.

In the opinion of the states who seceded, the federal Constitution was a contract. Under this contract each state had agreed to unite together as one nation. However, southerners maintained that the agreement was not binding; the states had not sacrificed their autonomy and could withdraw their consent to be controlled by the federal government. In the eyes of the Confederacy, their actions to create a new government were in line with the social contract theory of government that had influenced the founders of the American Republic. The new nation formed by these states would not be a federal union, but a confederation. In a confederation, individual member states agree to unite under a central government for some purposes, such as defense, but to retain autonomy in other areas of government. In this way, states could protect themselves, and slavery, from interference by what they perceived to be an overbearing central government.

The constitution of the Confederate States of America (CSA), or the Confederacy, drafted at a convention in Montgomery, Alabama, in February 1861, closely followed the 1787 Constitution. The only real difference between the two documents centered on slavery. The Confederate Constitution declared that the new nation existed to defend and perpetuate racial slavery, and the leadership of the slaveholding class. Specifically, the constitution protected the interstate slave trade, guaranteed that slavery would exist in any new territory gained by the Confederacy, and, perhaps most importantly, in Article One, Section Nine, declared that “No . . . law impairing or denying the right of property in negro slaves shall be passed.” Beyond its focus on slavery, the Confederate Constitution resembled the 1787 U.S. Constitution. It allowed for a Congress composed of two chambers, a judicial branch, and an executive branch with a president to serve for six years.

The convention delegates chose Jefferson Davis of Mississippi to lead the new provisional government as president and Alexander Stephens of Georgia to serve as vice president until elections could be held in the spring and fall of 1861. By that time, four new states—Virginia, Arkansas, Tennessee, and North Carolina—had joined the CSA. As 1861 progressed, the Confederacy claimed Missouri and Kentucky, even though no ordinance of secession had been approved in those states. Southern nationalism ran high, and the Confederacy, buoyed by its sense of purpose, hoped that their new nation would achieve eminence in the world.

By the time Lincoln reached Washington, DC, in February 1861, the CSA had already been established. The new president confronted an unprecedented crisis. A conference held that month with delegates from the Southern states failed to secure a promise of peace or to restore the Union. On inauguration day, March 4, 1861, the new president repeated his views on slavery: “I have no purpose, directly or indirectly, to interfere with the institution of slavery in the States where it exists. I believe I have no lawful right to do so, and I have no inclination to do so.” His recognition of slavery in the South did nothing to mollify enslavers, however, because Lincoln also pledged to keep slavery from expanding into the new western territories. Furthermore, in his inaugural address, Lincoln made clear his commitment to maintaining federal power against the secessionists working to destroy it. Lincoln declared that the Union could not be dissolved by individual state actions, and, therefore, secession was unconstitutional.

Read Lincoln’s entire inaugural address at the Yale Avalon project’s website. How would Lincoln’s audience have responded to this speech?

In this brief history of secession, historian Steven Hahn notes how secession was not a unanimous decision:

You can view the transcript for “Secession and the Civil War” here (opens in new window).

President Lincoln made it clear to Southern secessionists that he would fight to maintain federal property and to keep the Union intact. Other politicians, however, still hoped to avoid the use of force to resolve the crisis. In February 1861, Thomas Corwin, a representative from Ohio, introduced a proposal to amend the Constitution in the House of Representatives. He hoped to entice the rebellious states to return to the Union without resorting to force. His was but one of several measures proposed in early 1861 to head off the impending conflict and save the United States. The proposed amendment would have made it impossible for Congress to pass any law abolishing slavery. The House passed Corwin’s proposal on February 28, 1861, followed by the Senate on March 2, 1861. It was then sent to the states to be ratified. If ratified by three-quarters of state legislatures, it would become law. In his inaugural address, Lincoln stated that he had no objection to the amendment, and his predecessor, James Buchanan, had supported it. By the time of Lincoln’s inauguration, however, seven states had already left the Union. Of the remaining states, Ohio ratified the amendment in 1861, and Maryland and Illinois did so in 1862. This effort at reconciliation was too late to stem the tide of secession, and the Confederate states did not return to the Union. 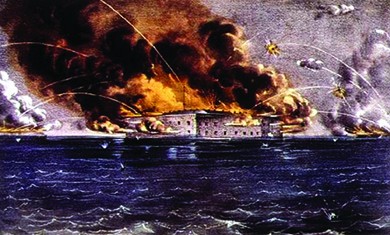 Figure 1. The Confederacy’s attack on Fort Sumter, depicted here in an 1861 lithograph by Currier and Ives, stoked pro-war sentiment on both sides of the conflict.

Indeed, by the time of the Corwin amendment’s passage through Congress, Confederate forces in the Deep South had already begun to take over federal forts. The loss of Fort Sumter, in the harbor of Charleston, South Carolina, proved to be the flashpoint in the contest between the new Confederacy and the federal government. A small Union garrison of fewer than one hundred soldiers and officers held the fort, making it a vulnerable target for the Confederacy. Fire-Eaters pressured Jefferson Davis to take Fort Sumter and thereby demonstrate the Confederate government’s resolve. Some also hoped that the Confederacy would gain foreign recognition, especially from Great Britain, by taking the fort in the South’s most important Atlantic port. The situation grew dire as local merchants refused to sell food to the fort’s Union soldiers, and by mid-April the garrison’s supplies began to run out. President Lincoln let it be known to Confederate leaders that he planned to resupply the Union forces. His strategy was clear: the decision to start the war would rest squarely on the Confederates, not on the Union. On April 12, 1861, Confederate forces in Charleston began a bombardment of Fort Sumter. Two days later, the Union soldiers there surrendered.

The attack on Fort Sumter meant war had come. On April 15, 1861, Lincoln called upon loyal states to supply armed forces to defeat the rebellion and regain Fort Sumter. Faced with the need to choose between the Confederacy and the Union, border states and those of the Upper South, which earlier had been reluctant to dissolve their ties with the United States, were moved to take action. They quickly voted for secession. A convention in Virginia that had been assembled earlier to consider the question of secession voted to join the Confederacy on April 17, two days after Lincoln called for troops. Arkansas left the Union on May 6 along with Tennessee one day later. North Carolina followed on May 20.

Not all residents of the border states and the Upper South wished to join the Confederacy, however. Pro-Union feelings remained strong in Tennessee, especially in the eastern part of the state where the enslaved population was small and consisted largely of house servants owned by the wealthy. The state of Virginia—home of revolutionary leaders and presidents such as George Washington, Thomas Jefferson, James Madison, and James Monroe—literally split on the issue of secession. Residents in the north and west of the state, where few enslavers resided, rejected secession. These counties subsequently united to form “West Virginia,” which entered the Union as a free state in 1863. The rest of Virginia, including the historic lands along the Chesapeake Bay that were home to such early American settlements as Jamestown and Williamsburg, joined the Confederacy. The addition of this area gave the Confederacy even greater hope and brought General Robert E. Lee, arguably the best military commander of the day, to their side. In addition, the secession of Virginia brought Washington, DC, perilously close to the Confederacy. Lincoln feared that the border state of Maryland would also join the CSA, thus trapping the U.S. capital within Confederate territories.

The Confederacy also gained the backing of the Five Civilized Tribes, as they were called, in the Indian Territory. The Five Civilized Tribes comprised the Choctaws, Chickasaws, Creeks, Seminoles, and Cherokees. The tribes supported slavery and many members were enslavers. These Indian slaveholders, who had been forced from their lands in Georgia and elsewhere in the Deep South during the presidency of Andrew Jackson, now found unprecedented common cause with White slaveholders. The CSA even allowed them to send delegates to the Confederate Congress.

While most slaveholding states joined the Confederacy, four crucial slave states remained in the Union. Delaware, which was technically a slave state despite its tiny enslaved population, never voted to secede. Maryland, despite deep divisions, remained in the Union as well. Missouri became the site of vicious fighting and the home of pro-Confederate guerillas but never joined the Confederacy. Kentucky declared itself neutral, although that did little to stop the fighting that occurred within the state. In all, these four states deprived the Confederacy of key resources and soldiers.

In part one of this two-part look at the U.S. Civil War, you’ll take a look at the causes, motivations, and nuances of the war.

You can view the transcript for “The Civil War, Part 1: Crash Course US History #20” here (opens in new window).

Confederacy: the new nation formed by the seceding southern states, also known as the Confederate States of America (CSA)

Fort Sumter: a fort in the harbor of Charleston, South Carolina, where the Union garrison came under siege by Confederate forces in an attack on April 12, 1861, beginning the Civil War