Origins of the Civil War

The Causes of the Civil War

Abraham Lincoln’s election sparked the southern secession fever into flame, but it alone did not cause the Civil War. For decades before Lincoln took office, the sectional divisions in the country had been widening. Both the northern and southern states engaged in inflammatory rhetoric and agitation, and emotions ran strong on both sides. Several factors played into the ultimate split between the North and the South.

One key irritant was the question of slavery’s expansion westward. The debate over whether new states would be slave or free reached back to the controversy over statehood for Missouri beginning in 1819 and Texas in the 1830s and early 1840s. This question arose again after the Mexican-American War (1846–1848), when the government debated whether slavery would be permitted in the territories taken from Mexico. Efforts in Congress to reach a compromise in 1850 fell back on the principle of popular sovereignty—letting the people in the new territories south of the 1820 Missouri Compromise line decide whether to allow slavery. This same principle came to be applied to the Kansas-Nebraska territories in 1854, a move that added fuel to the sectional conflict by destroying the Missouri Compromise boundary. Antislavery proponents feared this would allow slavery to spread into these new territories. In the end, popular sovereignty proved to be no solution at all. Proslavery and antislavery forces violently battled each other in an effort to gain the upper hand, giving the area the nickname “Bleeding Kansas.”

The small but very vocal abolitionist movement was another factor that contributed to the escalating tensions between the North and the South. Since the 1830s, abolitionists, led by journalist and reformer William Lloyd Garrison, had cast slavery as a national sin and called for its immediate end. For three decades, the abolitionists—a minority even within the antislavery movement—had had a significant effect on American society by bringing the evils of slavery into the public consciousness. By the 1850s, some of the most radical abolitionists, such as John Brown, had resorted to violence in their efforts to destroy the institution of slavery.

The formation of the Liberty Party (1840), the Free-Soil Party (1848), and the Republican Party (1854), all of which strongly opposed the spread of slavery to the West, brought the question solidly into the political arena. Although not all those who opposed the westward expansion of slavery had a strong abolitionist bent, the attempt to limit slaveholders’ control of their human property stiffened the resolve of southern leaders to defend their society at all costs. Prohibiting slavery’s expansion, they argued, ran counter to fundamental American property rights. Across the country, people of all political stripes worried that the nation’s arguments would cause irreparable rifts in the country. 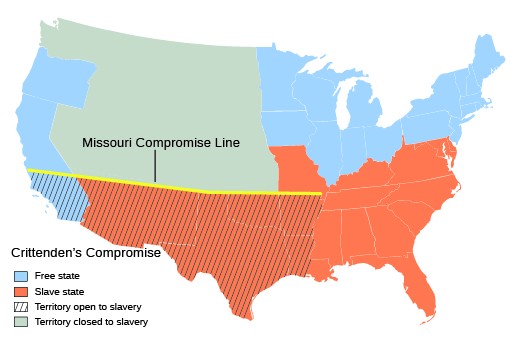 Figure 2. Crittenden’s Compromise would protect slavery in all states where it already existed. More importantly, however, it proposed to allow the western expansion of slavery into states below the Missouri Compromise line.

As the political debate over slavery intensified towards the end of the 1850s, President James Buchanan would not directly address the issue of secession prior to his term’s end. Any effort to try to solve the issue therefore fell upon Congress, specifically a Committee of Thirteen including prominent men such as Stephen Douglas, William Seward, Robert Toombs, and John Crittenden. Crittenden, a senator from Kentucky who had helped form the Constitutional Union Party during the 1860 presidential election, attempted to diffuse the explosive situation by offering six constitutional amendments and a series of resolutions, known as the Crittenden Compromise. 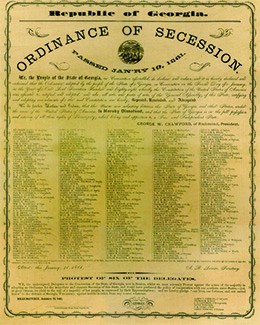 Figure 3. Georgia’s Ordinance of Secession and those of the other Deep South states were all based on that of South Carolina, which was drafted just a month after Abraham Lincoln was elected, but before he took office.

Crittenden’s immediate goal was to keep the South from seceding, and his long term strategy was to transform the Constitution to explicitly protect slavery forever. Specifically, Crittenden proposed an amendment that would restore the 36°30′ line from the Missouri Compromise and extend it all the way to the Pacific Ocean, protecting and ensuring slavery south of the line while prohibiting it north of the line. He further proposed an amendment that would prohibit Congress from abolishing slavery anywhere it already existed or from interfering with the interstate slave trade.

Republicans, including President-elect Lincoln, rejected Crittenden’s proposals because they ran counter to the party’s goal of keeping slavery out of the territories. The southern states also rejected Crittenden’s attempts at compromise, because it would prevent enslavers from taking human chattel north of the 36°30′ line.

In the end, no compromise would be had by either side. The election of Lincoln and the perceived threat to the institution of slavery proved too much for the deep southern states. South Carolina acted almost immediately, calling a convention to declare secession. On December 20, 1860, only a few days after Crittenden’s proposal was introduced in Congress, South Carolina seceded from the United States in a unanimous 169–0 vote. Three more states of the Deep South—Mississippi, Florida, and Alabama—also seceded before the U.S. Senate rejected Crittenden’s proposal on January 16, 1861. Georgia, Louisiana, and Texas joined them in rapid succession on January 19, January 26, and February 1, respectively. In many cases, these secessions occurred after extremely divided conventions and popular votes. Once these states declared secession, Lincoln and the North would be forced to respond, while other southern states, especially those bordering northern states, would be forced to take sides.

For a quick review of the events leading up to war, watch the video summary below.

Note that the video has no narration. You can view the transcript for this segmented clip of “Trigger Events of the Civil War” here (opens in new window).

Explore the causes, battles, and aftermath of the Civil War at the interactive website offered by the National Parks Service.

Crittenden Compromise: a compromise, suggested by Kentucky senator John Crittenden, that would restore the 36°30′ line from the Missouri Compromise and extend it to the Pacific Ocean, allowing slavery to expand into the southwestern territories