Introduction to Early Mobilization and War

What you’ll learn to do: examine the strengths and weaknesses of the Confederacy and the Union, and explain some of the early battles of the war 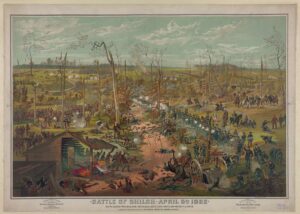 Many in both the North and the South believed that a short, decisive confrontation would settle the question of the Confederacy. Any hopes for a brief conflict were eradicated when Union and Confederate forces met on July 21, 1861 at the Battle of Bull Run, near Manassas, Virginia. While not particularly deadly, the Confederate victory proved that the Civil War would be long and costly.

The war dragged on into a second year. Both sides mobilized economic and human resources, with advantages and disadvantages on each side that led to a rough equilibrium. Losses at Manassas and Fredericksburg, Virginia, kept the North from achieving the speedy victory its generals had hoped for, but the Union did make gains and continued to press forward. While they could not capture the Southern capital of Richmond, they were victorious in the Battle of Shiloh and captured New Orleans and Memphis. By the end of 1862, the Confederates had lost major ground on the western front, yet they were not out. The war still raged on with no clear indication of which side would end up the ultimate victor.