Figure 1. Major events in America around the late 18th and early 19th century.

Remember that Hamilton’s plan to shore up the new nation’s financial footings rested on the sale of bonds. In order to pay what it owed on the new bonds, the federal government needed reliable sources of tax revenue. In 1791, Hamilton proposed a federal excise tax on the production, sale, and consumption of a number of goods, including whiskey.

Grain was the most valuable cash crop for many American farmers. In the West, selling grain to a local distillery for alcohol production was typically more profitable than shipping it over the Appalachians to eastern markets. Hamilton’s whiskey tax thus placed a special burden on western farmers. It seemed to divide the young republic in half—geographically between the East and West, economically between merchants and farmers, and culturally between cities and the countryside. Farmers in the western counties of Pennsylvania produced whiskey from their grain for economic reasons. Without adequate roads or other means to transport a bulky grain harvest, these farmers distilled their grains into gin and whiskey, which were more cost-effective to transport. Since these farmers depended on the sale of whiskey, some citizens in western Pennsylvania (and elsewhere) viewed the new tax as further proof that the new national government favored the commercial classes on the eastern seaboard at the expense of farmers in the West. On the other hand, supporters of the tax argued that it helped stabilize the economy and its cost could easily be passed on to the consumer, not the farmer-distiller. 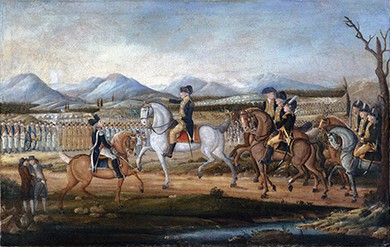 Figure 2. This painting, attributed to Frederick Kemmelmeyer ca. 1795, depicts the massive force George Washington led to put down the Whiskey Rebellion of the previous year. Federalists made clear they would not tolerate mob action.

In the fall of 1791, sixteen men in western Pennsylvania, disguised in women’s clothing, assaulted a tax collector named Robert Johnson. They tarred and feathered him, and the local deputy marshals seeking justice met similar fates. They were robbed and beaten, whipped and flogged, tarred and feathered, and tied up and left for dead. The rebel farmers also adopted other protest methods from the Revolution and Shays’ Rebellion, writing local petitions and erecting liberty poles. For the next two years, tax collections in the region dwindled.

Then, in July 1794, groups of armed farmers attacked federal marshals and tax collectors, burning down at least two tax collectors’ homes. At the end of the month, an armed force of about seven thousand, led by the radical attorney David Bradford, robbed the U.S. mail and gathered about eight miles east of Pittsburgh. The extent of their discontent found expression in their plan to form an independent western commonwealth, and they even began negotiations with British and Spanish representatives, hoping to secure their support for independence from the United States. The rebels also contacted their backcountry neighbors in Kentucky and South Carolina, circulating the idea of secession.

President Washington responded quickly. First, Washington dispatched a committee of three distinguished Pennsylvanians to meet with the rebels and try to bring about a peaceful resolution. Meanwhile, he gathered an army of thirteen thousand militiamen in Carlisle, Pennsylvania. On September 19, Washington became the only sitting president to lead troops in the field, though he quickly turned over the army to the command of Henry Lee, a Revolutionary hero and the current governor of Virginia.

You can view the transcript for “Whiskey Rebellion” here (opens in new window).

As the federal army moved westward, the farmers scattered. Hoping to make a dramatic display of federal authority, Alexander Hamilton oversaw the arrest and trial of a number of rebels. Many were released because of a lack of evidence, and most of those who remained, including two men sentenced to death for treason, were soon pardoned by the president. The Whiskey Rebellion had shown that the federal government was capable of quelling internal unrest. This force made it known, both domestically and to the European powers that looked on in anticipation of the new republic’s collapse, that the national government would do everything in its power to ensure the survival of the United States. But the rebellion also demonstrated that some citizens, especially poor westerners, viewed it as their enemy.

Alexander Hamilton: “Shall the majority govern or be governed?”

Alexander Hamilton frequently wrote persuasive essays under pseudonyms, like “Tully,” as he does here. In this 1794 essay, Hamilton denounces the whiskey rebels and majority rule.

It has been observed that the means most likely to be employed to turn the insurrection in the western country to the detriment of the government, would be artfully calculated among other things ‘to divert your attention from the true question to be decided.’

Let us see then what is this question. It is plainly this—shall the majority govern or be governed? shall the nation rule, or be ruled? shall the general will prevail, or the will of a faction? shall there be government, or no government? . . .

The Constitution you have ordained for yourselves and your posterity contains this express clause, ‘The Congress shall have power to lay and collect taxes, duties, imposts, and Excises, to pay the debts, and provide for the common defence and general welfare of the United States.’ You have then, by a solemn and deliberate act, the most important and sacred that a nation can perform, pronounced and decreed, that your Representatives in Congress shall have power to lay Excises. You have done nothing since to reverse or impair that decree. . . .

There is no road to despotism more sure or more to be dreaded than that which begins at anarchy.”

What are the major arguments put forward by Hamilton in this document? Who do you think his audience is?

Relationships with Native Americans were a significant problem for Washington’s administration, but one on which White citizens agreed: Native Americans stood in the way of White settlement and, as the 1790 Naturalization Act made clear, were not citizens. After the War of Independence, White settlers poured into lands west of the Appalachian Mountains. As a result, from 1785 to 1795, a state of war existed on the frontier between these settlers and the Native Americans who lived in the Ohio territory. In both 1790 and 1791, the Shawnee and Miami had defended their lands against Whites who arrived in ever greater numbers from the East. In response, Washington appointed General Anthony Wayne to bring the Western Confederacy—a loose alliance of tribes—to heel. In 1794, at the Battle of Fallen Timbers, Wayne was victorious. With the 1795 Treaty of Greenville, the Western Confederacy gave up their claims to Ohio.

excise tax: a tax on a good imposed at the time of manufacture rather than at sale to the end consumer