Between nine and fifteen thousand years ago, scholars believe that a land bridge existed between Asia and North America in the region that we now call Beringia. The first inhabitants of what would be named the Americas migrated across this bridge in search of food. When the glaciers melted, water engulfed Beringia, and the Bering Strait was formed. Later settlers came by boat across the narrow strait. (The fact that Asians and American Indians share genetic markers on a Y chromosome lends credibility to this migration theory.) Continually moving southward, the settlers eventually populated both North and South America, creating unique cultures that ranged from the highly complex and urban Aztec civilization, in what is now Mexico City, to the woodland tribes of eastern North America. Recent research along the west coast of South America suggests that migrant populations may have traveled down this coast by water as well as by land.

Evidence found at Monte Verde, a site in modern-day Chile, suggests that human activity began there at least 14,500 years ago. Similar evidence hints at human settlement in the Florida panhandle at the same time. On many points, archaeological and traditional knowledge sources converge: the dental, archaeological, linguistic, oral, ecological, and genetic evidence illustrates a great deal of diversity, with numerous groups settling and migrating over thousands of years, potentially from many different points of origin. Whether emerging from the earth, water, or sky; being made by a creator; or migrating to their homelands, modern Native American communities recount histories in America that predate human memory.

In the Northwest, Native groups exploited the great salmon-filled rivers. On the plains and prairie lands, hunting communities followed bison herds and moved according to seasonal patterns. In mountains, prairies, deserts, and forests, the cultures and ways of life of paleo-era ancestors were as varied as the geography. These groups spoke hundreds of languages and adopted distinct cultural practices. Rich and diverse diets fueled massive population growth across the continent.

Agriculture arose sometime between five thousand and nine thousand years ago, almost simultaneously in the Eastern and Western Hemispheres. Mesoamericans in modern-day Mexico and Central America relied on domesticated maize (corn) to develop the hemisphere’s first settled population around 1200 BCE. Corn was high in caloric content, easily dried and stored, and, in Mesoamerica’s warm and fertile Gulf Coast, could sometimes be harvested twice in a year. Corn—as well as other Mesoamerican crops—spread across North America and continues to hold an important spiritual and cultural place in many Native communities.

Agriculture flourished in the fertile river valleys between the Mississippi River and the Atlantic Ocean, an area known as the Eastern Woodlands. There, three crops in particular—corn, beans, and squash, known as the Three Sisters—provided nutritional needs necessary to sustain cities and civilizations. In Woodland areas from the Great Lakes and the Mississippi River to the Atlantic coast, Native communities managed their forest resources by burning underbrush to create vast open hunting grounds and to clear the ground for planting the Three Sisters. Many groups used shifting cultivation, in which farmers cut the forest, burned the undergrowth, and then planted seeds in the nutrient-rich ashes. When crop yields began to decline, farmers moved to another field and allowed the land to recover and the forest to regrow before again cutting the forest, burning the undergrowth, and restarting the cycle. This technique was particularly useful in areas with difficult soil. But in the fertile regions of the Eastern Woodlands, Native American farmers engaged in permanent, intensive agriculture, using hand tools rather than European-style plows. The rich soil and use of hand tools enabled effective and sustainable farming practices, producing high yields without overburdening the soil. Typically in Woodland communities, women practiced agriculture while men hunted and fished.

Mesoamerica is the geographic area stretching from north of Panama up to the desert of central Mexico. Although marked by great topographic, linguistic, and cultural diversity, this region cradled a number of civilizations with similar characteristics. Mesoamericans were polytheistic. Their gods possessed both male and female traits and demanded blood sacrifices, whether of enemies taken in battle or in the form of ritual bloodletting. Corn, or maize, domesticated by 5000 BCE, formed the basis of their diet. They developed a mathematical system, built huge edifices, and devised a calendar that accurately predicted eclipses and solstices and that priest-astronomers used to direct the planting and harvesting of crops. Most important for our knowledge of these peoples, they created the only known written language in the Western Hemisphere. Researchers have made much progress in interpreting the inscriptions on their temples and pyramids. Though the area had no overarching political structure, trade over long distances helped diffuse culture. Weapons made of obsidian, jewelry crafted from jade, feathers woven into clothing and ornaments, and cacao beans that were whipped into a chocolate drink formed the basis of commerce. The mother of Mesoamerican cultures was the Olmec civilization. 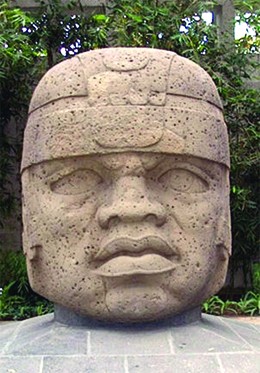 Figure 3. The Olmec carved heads from giant boulders that ranged from four to eleven feet in height and could weigh up to fifty tons. All these figures have flat noses, slightly crossed eyes, and large lips. These physical features can be seen today in some of the peoples indigenous to the area.

Flourishing along the hot Gulf Coast of Mexico from about 1200 to about 400 BCE, the Olmec produced a number of major works of art, architecture, pottery, and sculpture. Most recognizable are their giant head sculptures and the pyramid in La Venta. The Olmec built aqueducts to transport water into their cities and irrigate their fields. They grew maize, squash, beans, and tomatoes. They also bred small domesticated dogs which, along with fish, provided their protein. Although no one knows what happened to the Olmec after about 400 BCE, in part because the jungle reclaimed many of their cities, their culture was the base upon which the Maya and the Aztec built. It was the Olmec who worshipped a rain god, a maize god, and the feathered serpent that was so important in the future pantheons of the Aztecs (who called him Quetzalcoatl) and the Maya (to whom he was Kukulkan). The Olmec also developed a system of trade throughout Mesoamerica, giving rise to an elite class. 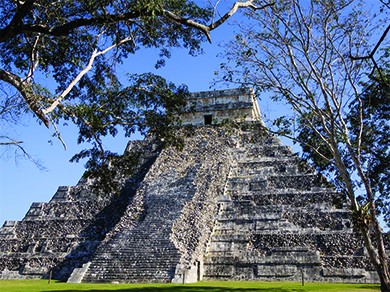 Figure 4. El Castillo, located at Chichen Itza in the eastern Yucatán peninsula, served as a temple for the god Kukulkan. Each side contains ninety-one steps to the top. When counting the top platform, the total number of stairs is three hundred and sixty-five, the number of days in a year. (credit: Ken Thomas)

After the decline of the Olmec, a city rose in the fertile central highlands of Mesoamerica. One of the largest population centers in pre-Columbian America and home to more than 100,000 people at its height in about 500 CE, Teotihuacan was located about thirty miles northeast of modern Mexico City. The ethnicity of this settlement’s inhabitants is debated; some scholars believe it was a multiethnic city. Large-scale agriculture and the resultant abundance of food allowed time for people to develop special trades and skills other than farming. Builders constructed over twenty-two hundred apartment compounds for multiple families, as well as more than a hundred temples. Among these were the Pyramid of the Sun (which is two hundred feet high) and the Pyramid of the Moon (one hundred and fifty feet high). Near the Temple of the Feathered Serpent, graves have been uncovered that suggest humans were sacrificed for religious purposes. The city was also the center for trade, which extended to settlements on Mesoamerica’s Gulf Coast.

The Maya were one Mesoamerican culture that had strong ties to Teotihuacan. The Maya’s architectural and mathematical contributions were significant. Flourishing from roughly 750 BCE to 900 CE (though earlier Mayan settlements date even before 2000 BCE) in what is now Mexico, Belize, Honduras, and Guatemala, the Maya perfected the calendar and written language started by the Olmec. The Maya devised a written mathematical system to record crop yields, document the size of the population, and assist in trade. Surrounded by farms relying on primitive agriculture, they built the city-states of Copan, Tikal, and Chichen Itza along their major trade routes, as well as temples, statues of gods, pyramids, and astronomical observatories. However, because of poor soil and a drought that lasted nearly two centuries, their civilization declined by about 900 CE and they abandoned their large population centers.

The Spanish found little organized resistance among the weakened Maya upon their arrival in the 1520s. However, they did find Mayan history, in the form of glyphs, or pictures representing words, recorded in folding books called codices (the singular is codex). In 1562, Bishop Diego de Landa, who feared that the newly Christianized Natives had reverted to their traditional religious practices, collected and burned every codex he could find. Today only a few survive.

Take the time to pause and reflect on the things you’ve learned by testing your knowledge through these practice questions. You’ll find them housed within these “Try It” boxes throughout the course.