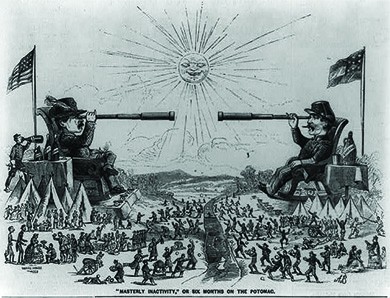 Figure 1. As this cartoon indicates, the fighting strategy at the beginning of the war included watchful waiting by the leaders of the North and South.

The military forces of the Confederacy and the Union battled in 1861 and early 1862 without either side gaining the upper hand. The majority of military leaders on both sides had received the same military education and often knew one another personally, either from their time as students at West Point or as commanding officers in the Mexican-American War. This familiarity allowed them to anticipate each other’s strategies. Both sides believed in the use of concentrated armies charged with taking the capital city of the enemy. For the Union, this meant the capture of the Confederate capital in Richmond, Virginia, whereas Washington, DC stood as the prize for Confederate forces. After hopes of a quick victory faded at Bull Run, the months dragged on without any major movement on either side.

General George B. McClellan, the general-in-chief of the army, responsible for overall control of Union land forces, proved especially reluctant to engage in battle with the Confederates. McClellan believed that Confederate forces were too strong to defeat and he was hesitant to risk his troops in battle. His cautious nature made him popular with his men but not with the president or Congress. By 1862, however, both President Lincoln and the new Secretary of War Edwin Stanton had grown tired of waiting. The Union put forward a new effort to bolster troop strength, enlisting one million men to serve for three-year stints in the Army of the Potomac—the Union fighting force operating outside Washington, DC. In January 1862, Lincoln and Stanton ordered McClellan to invade the Confederacy with the goal of capturing Richmond.

To that end, General McClellan slowly moved 100,000 soldiers toward Richmond but stopped a few miles outside the city. As he did so, a Confederate force led by Thomas “Stonewall” Jackson moved north to take Washington, DC. To fend off Jackson’s attack, somewhere between one-quarter and one-third of McClellan’s soldiers, led by Major General Irvin McDowell, returned to defend the nation’s capital, a move that Jackson hoped would leave the remaining troops near Richmond more vulnerable. Having succeeded in drawing off a sizable portion of the Union force, he joined General Lee to launch an attack on McClellan’s remaining soldiers near Richmond. From June 25 to July 1, 1862, the two sides engaged in the brutal Seven Days Battles that killed or wounded almost twenty thousand Confederate and ten thousand Union soldiers. McClellan’s army finally returned north, having failed to take Richmond.

General Lee, flush from his success in protecting Richmond, tried to capitalize on the Union’s failure by taking the fighting northward. He moved his forces into northern Virginia, where, at the Second Battle of Bull Run, the Confederates again defeated the Union forces. Lee then pressed into Maryland, where his troops met the much larger Union forces near Sharpsburg, at Antietam Creek. The ensuing one-day battle on September 17, 1862, led to a tremendous loss of life. Although there are varying opinions about the total number of deaths, eight thousand soldiers were killed or wounded, more than on any other single day of combat. Once again, McClellan, mistakenly believing that the Confederate troops outnumbered his own, held back a significant portion of his forces. Lee withdrew from the field first, but McClellan, fearing he was outnumbered, refused to pursue him.

The Union army’s inability to destroy Lee’s army at Antietam made it clear to Lincoln that McClellan would never win the war, and the president was forced to seek a replacement. Lincoln wanted someone who could deliver a decisive Union victory. He also personally disliked McClellan, who referred to the president as a “baboon” and a “gorilla,” and constantly criticized his decisions. Lincoln chose General Ambrose E. Burnside to replace McClellan as commander of the Army of the Potomac. In December 1862, Burnside attempted to advance into Virginia. His efforts failed, as Confederates held their position at Fredericksburg and devastated Burnside’s forces with heavy artillery fire. The Union’s defeat at Fredericksburg harmed morale in the North but bolstered Confederate spirits. By the end of 1862, the Confederates were still holding their ground in Virginia. Burnside’s failure led Lincoln to make another change in leadership, and Joseph “Fighting Joe” Hooker took over command of the Army of the Potomac in January 1863.

The map below shows the areas controlled by the North and South, as well as the major battles of 1862. You can see the Battle of Antietam and Battle of Fredericksburg in Northern Virginina on the ma[, as well as Ft. Donelson, a key battle in February of 1862 along the western front, in which General Ulysses S. Grant rose out of obscurity, earning the nickname “Unconditional Surrender” Grant. That battle, combined with the devastating Battle of Shiloh, resulted in the North gaining control of critical waterways and territory in Kentucky and Tennessee. 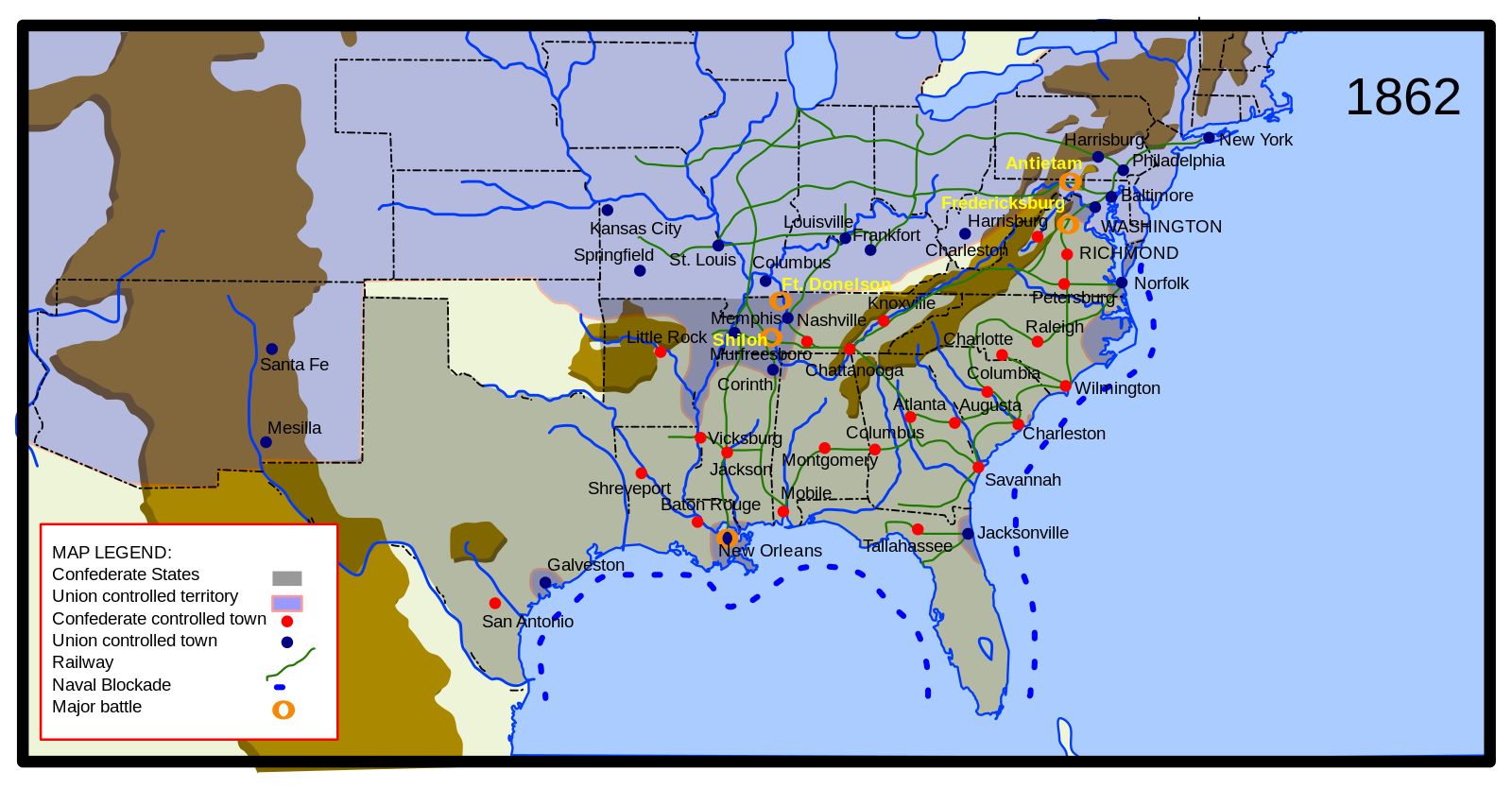 Figure 2. A few major battles of 1862, including Antietam, Frederickburg, Ft. Donelson, and Shiloh.

To see where the battles were fought, look at this resource below from Esri Storymaps. Scroll down to find an interactive map showing the key battles during the war and click on the icons to learn more about each battle. 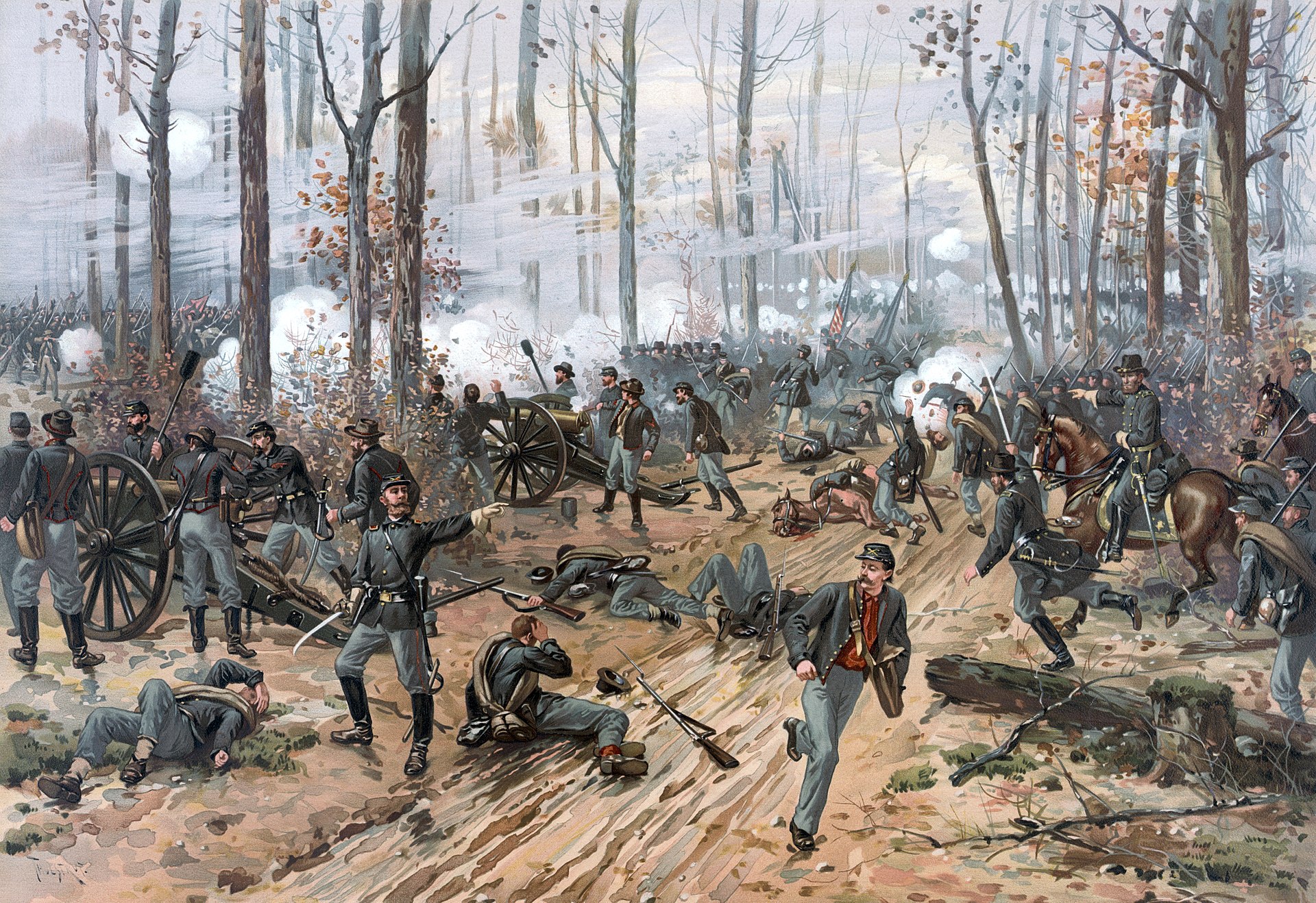 General Ulysses S. Grant’s Army of the West, operating in Kentucky, Tennessee, and the Mississippi River Valley, had been more successful. In the western campaign, the goal of both the Union and the Confederacy was to gain control of the major rivers in the west, especially the Mississippi. If the Union could control the Mississippi, the Confederacy would be split in two. The fighting in this campaign initially centered in Tennessee, where Union forces commanded by Grant pushed Confederate troops back and gained control of the state. The major battle in the western theater took place at Pittsburgh Landing, Tennessee, on April 6 and 7, 1862. Grant’s army was camped on the west side of the Tennessee River near a small log church called Shiloh, which gave the battle its name. On Sunday morning, April 6, Confederate forces under General Albert Sidney Johnston attacked Grant’s encampment with the goal of separating them from their supply line on the Tennessee River and driving them into the swamps on the river’s western side. Johnston hoped his troops could then decimate the Union forces mired in the swamp. Union general William Tecumseh Sherman tried to rally the Union forces as Grant, who had been convalescing from an injured leg and was unable to walk without crutches, called for reinforcements and tried to mount a defense. However, many of Union troops fled in terror.

Unfortunately for the Confederates, Johnston was killed on the afternoon of the first day. Leadership of the Southern forces fell to General P. G. T. Beauregard, who ordered an assault at the end of that day. This assault was so desperate that one of the two attacking columns did not even have ammunition. Heavily reinforced Union forces counterattacked the next day, and they routed the Confederate forces. Grant had maintained the Union foothold in the western part of the Confederacy. The North could now concentrate on its efforts to gain control of the Mississippi River, splitting the Confederacy in two and depriving it of its most important water route.

The Battle of Shiloh, lasting only two days, was the costliest single battle in American history up to that time. The loss of life shocked both the Union and the Confederacy with approximately twenty-three thousand casualties, a number that exceeded casualties from all of the United States’ previous wars combined. The subsequent capture of New Orleans by Union forces proved a heavy blow to the Confederacy and capped an 1862 spring of success for the North in the Western Theater.

In the spring and summer of 1862, the Union succeeded in gaining control of part of the Mississippi River. In April 1862, the Union navy under Admiral David Farragut fought its way past the forts that guarded New Orleans and fired naval guns upon the below-sea-level city. When it became obvious that New Orleans could no longer be defended, Confederate major general Marshall Lovell sent his artillery upriver to Vicksburg, Mississippi. Armed civilians in New Orleans fought the Union forces that entered the city. They also destroyed ships and military supplies that might be used by the Union. Upriver, Union naval forces also bombarded Fort Pillow, forty miles from Memphis, Tennessee, a Southern industrial center and one of the largest cities in the Confederacy. On June 4, 1862, the Confederate defenders abandoned the fort. On June 6, Memphis fell to the Union after destroyed the ships guarding the city.

This video highlights the key battles of 1862. It moves quickly, so try to follow along and review the major milestones that you read about above.

You can view the transcript for “Civil War 1862: The Civil War in Four Minutes” here (opens in new window).

This CrashCourse video details some of the major battles of the Civil War. Watch it to review the 1862 battles and to get a brief overview of the other major battles that shaped the course of the war.

You can view the transcript for “Battles of the Civil War: Crash Course US History #19” here (opens in new window).

Antietam: September 17, 1862 battle in Maryland. Deadliest one-day battle in American history, and while considered a stalemate, it did halt General Lee’s advancement into the North. The Union’s ability to stop further encroachment by the Confederate forces convinced Lincoln the time was right to issue the Emancipation Proclamation.

Army of the Potomac: the Union fighting force operating outside Washington, DC

Army of the West: the Union fighting force operating in Kentucky, Tennessee, and the Mississippi River Valley

Battle of New Orleans: Union navy captured this city in April 1862, giving the North control of a key gateway to the Mississippi River.

Battle of Shiloh: the costliest multi-day battle in American history up to that time, occurring April 6-7, 1862. The Union victory resulted in 23,000 casualties. It opened the door for Grant to take control of the Mississippi River, severing the South in two.

Fort Pillow: Union forces bombarded this fort that stood as guard for Memphis, Tennessee, a key Southern industrial city. On June 4, 1862, the Confederate defenders abandoned the fort, and Memphis fell to the Union two days later.

Seven Days Battles: a series of seven battles over seven days from June 25 to July 1, 1862, near Richmond, Virginia

Vicksburg: city of strategic importance on the Mississippi River. The Union would eventually take the city in June 1863, cementing their control of the river and striking a severe blow to the Confederate war effort