Free and Enslaved Black Americans and the Challenge to Slavery

Revolution in France, and even more so, revolution in Haiti, left southern White people terrified at the possibility of a slave revolt. Soon enough, they feared their worst nightmare was coming true.

Led by an enslaved man named Gabriel, close to one thousand enslaved Black people planned to attack Richmond in late August 1800 to end slavery in Virginia. According to the plan, some of the conspirators would set diversionary fires in the city’s warehouse district. Others would attack Richmond’s White residents, seize weapons, and capture Virginia Governor James Monroe. On August 30th, two enslaved men revealed the plot to their master who notified authorities. Faced with bad weather, Gabriel and other leaders postponed the attack until the next night, giving Governor Monroe and the militia time to capture the conspirators. After briefly escaping, Gabriel was seized, tried, and hanged along with twenty-five others. Their executions sent the message that others would be punished if they challenged slavery. Subsequently, the Virginia government increased restrictions on free people of color.

Gabriel’s rebellion, as the plot came to be known, sent several messages to Virginia’s White residents. It suggested that enslaved Black people were capable of preparing and carrying out a sophisticated and violent revolution—undermining White supremacist assumptions about the inherent intellectual inferiority of Black people. Furthermore, it demonstrated that White efforts to suppress news of other slave revolts—especially the 1791 slave rebellion in Haiti—had failed. Not only did some literate enslaved persons read accounts of the successful attack in Virginia’s newspapers, others heard about the rebellion firsthand after July 1793 when slaveholding refugees from Haiti arrived in Virginia with their enslaved laborers.

The complicated situation in Haiti, which remained a French colony in the late 1790s, also came to the attention of President Adams. The president, with the support of Congress, had created a U.S. Navy that now included scores of vessels. Most of the American ships cruised the Caribbean, giving the United States the edge over France in the region. In Haiti, the rebellion leader Toussaint, who had to contend with various domestic rivals seeking to displace him, looked to end a U.S. embargo on France and its colonies, put in place in 1798. Toussaint needed help in order to deal with civil unrest. In early 1799, in order to capitalize upon trade in the lucrative West Indies and undermine France’s hold on the island, Congress ended the ban on trade with Haiti—a move that acknowledged Toussaint’s leadership, to the horror of American slaveholders. Toussaint was able to secure an independent Black republic in Haiti by 1804.

Learn more about the Haitian revolution in this Crash Course video.

The Haitian Revolution (1791-1804) inspired free and enslaved Black people and terrified White people throughout the United States. Port cities in the United States were flooded with news and refugees. Free people of color embraced the revolution, understanding it as call for full abolition and the rights of citizenship denied in the United States. Over the next several decades, Black Americans continually looked to Haiti for inspiration in their struggle for freedom.

For example, in 1829 David Walker, a Black abolitionist in Boston, wrote an Appeal that called for resistance to slavery and racism. Walker called Haiti the “glory of the Blacks and terror of the tyrants” and said that Haitians, “according to their word, are bound to protect and comfort us.” Haiti also proved that, given equal opportunities, people of color could achieve as much as White people. In 1826 the third college graduate of color in the United States, John Russwurm, gave a commencement address at Bowdoin College, noting that, “Haytiens have adopted the republican form of government…[and] in no country are the rights and privileges of citizens and foreigners more respected, and crimes less frequent.” In 1838 the Colored American, an early Black newspaper, professed that, “No one who reads, with an unprejudiced mind, the history of Hayti…can doubt the capacity of colored men, nor the propriety of removing all their disabilities.” Haiti, and the activism it inspired, sent the message that enslaved and free Black people could not be omitted from conversations about the meaning of liberty and equality. Their words and actions—on plantations, streets, and the printed page—left an indelible mark on early national political culture.

The Black activism inspired by Haiti’s revolution was so powerful that anxious White people scrambled to use the violence of the Haitian revolt to reinforce pro-slavery, White supremacy by limiting the social and political lives of people of color. White publications mocked Black Americans as buffoons, ridiculing calls for abolition and equal rights. The most (in)famous of these, the “Bobalition” broadsides, published in Boston in the 1810s, crudely caricatured African-Americans. Widely distributed materials like these became the basis for racist ideas that thrived in the nineteenth century and beyond. These tropes divided White citizens and Black non-citizens. But such ridicule also implied that Black Americans’ presence in the political conversation was significant enough to require it. The need to reinforce such an obvious difference between Whiteness and Blackness suggests that the differences might not be so obvious after all. 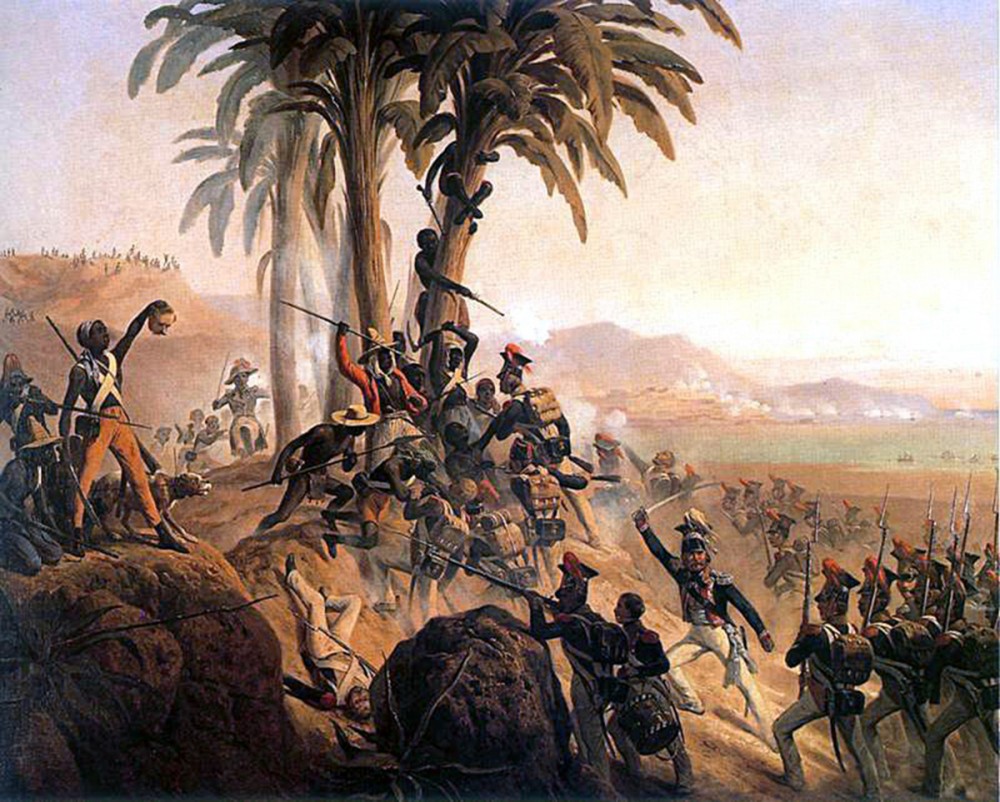 Figure 1. The idea and image of Black Haitian revolutionaries sent shockwaves throughout white America. That enslaved Black and freed people might turn violent against White people, so obvious in this image where a Black soldier holds up the head of a White soldier, remained a serious fear in the hearts and minds of White southerners throughout the antebellum period.

Henry Moss, a enslaved individual in Virginia, became arguably the most famous Black man of the day when white spots appeared on his body in 1792, turning him visibly white within three years. As his skin changed, Moss marketed himself as “a great curiosity” in Philadelphia and soon earned enough money to buy his freedom. He met the great scientists of the era—including Samuel Stanhope Smith and Dr. Benjamin Rush—who joyously deemed Moss to be living proof of their theory that “the Black Color (as it is called) of the Negroes is derived from the leprosy.” Something, somehow, was “curing” Moss of his Blackness. And in that whitening body of slave-turned-patriot-turned-curiosity, many Americans fostered ideas of race that would cause major problems in the years ahead.

The first decades of the new American republic coincided with a radical shift in understandings of race. Politically and culturally, Enlightenment thinking fostered beliefs in common humanity, the possibility of societal progress, the remaking of oneself, and the importance of one’s social and ecological environment—a four-pronged revolt against the hierarchies of the Old World. Yet a tension arose due to Enlightenment thinkers’ desire to classify and order the natural world. Carolus Linnaeus, Comte de Buffon, Johann Friedrich Blumenbach and others created connections between race and place as they divided the racial “types” of the world according to skin color, cranial measurements, and hair. They claimed that years under the hot sun and tropical climate of Africa darkened the skin and reconfigured the skulls of the African race, whereas the cold northern latitudes of Europe molded and sustained the “Caucasian” race. The environments endowed both races with respective characteristics, which accounted for differences in humankind tracing back to a common ancestry. A universal human nature, therefore, housed not fundamental differences, but rather the “civilized” and the “primitive”—two poles on a scale of social progress.

Informed by European anthropology and republican optimism, Americans confronted their own uniquely problematic racial landscape. In 1787, Samuel Stanhope Smith published his treatise Essay on the Causes of the Variety of Complexion and Figure in the Human Species, which further articulated the theory of racial change and suggested that improving the social environment would tap into the innate equality of humankind and dramatically uplift the nonwhite races. The proper society, he and others believed, could gradually “whiten” men the way nature spontaneously chose to whiten Henry Moss. Thomas Jefferson disagreed. While Jefferson thought Native Americans could improve and become “civilized,” he declared in his Notes on the State of Virginia (1784) that Black people were incapable of mental improvement and that they might even have a separate ancestry—a theory known as polygenesis, or multiple creations. His belief in polygenesis was less to justify slavery—slaveholders universally rejected the theory as antibiblical and thus a threat to their primary instrument of justification, the Bible—and more to justify schemes for a white America, such as the plan to gradually send freed enslaved people to Africa. Many Americans believed nature had made the White and Black races too different to peacefully coexist, and they viewed African colonization as the solution to America’s racial problem.

Jefferson’s Notes on the State of Virginia sparked considerable backlash from antislavery and Black communities. The celebrated Black surveyor Benjamin Banneker, for example, immediately wrote to Jefferson and demanded he “eradicate that train of absurd and false ideas” and instead embrace the belief that we are “all of one flesh” and with “all the same sensations and endowed…with the same faculties.” Many years later, in his Appeal to the Colored Citizens of the World (1829), David Walker channeled decades of Black protest, simultaneously denouncing the moral rot of slavery and racism while praising the inner strength of the race.

Jefferson had his defenders. Men such as Charles Caldwell and Samuel George Morton hardened Jefferson’s skepticism with the “biological” case for Black and White people not only having separate creations, but actually being different species—a position increasingly articulated throughout the antebellum period. Few Americans subscribed wholesale to such theories, but many shared beliefs in White supremacy. As the decades passed, White Americans were forced to acknowledge that if the Black population was indeed “whitening”, it was a result of interracial sex and not the environment. The sense of inspiration and wonder that followed Henry Moss in the 1790s would have been impossible just a generation later.

polygenesis: the idea that White and Black people did not share a common creation narrative and were instead descended from distinct ancestries; often used to justify oppression of Black people