The Glorious Revolution and the English Empire

Charles II ruled effectively, but his successor, James II, made several crucial mistakes. Eventually, Parliament again overthrew the authority of their king, this time turning to the Dutch Prince William of Holland and his English bride, Mary, the daughter of James II. This relatively peaceful coup was called the Glorious Revolution. English colonists in the era of the Glorious Revolution experienced religious and political conflict that reflected transformations in Europe. It was a time of great anxiety for the colonists.

This video explains the changes leading up to the Glorious Revolution.

You can view the transcript for “What Made the Glorious Revolution Glorious?” here (opens in new window).

In the 1670s, King Charles II tightened English control over America, creating the royal colony of New Hampshire in 1678, and transforming Bermuda into a crown colony in 1684. The King’s death in 1685 and subsequent rebellions in England and Scotland against the new Catholic monarch, James II, threw Bermuda into crisis. Irregular reports made it unclear who was winning or who would protect their island. Bermudians were not alone in their wish for greater protection. On the mainland, Native Americans led by Metacomet—or as the English called him, King Philip—devastated New England between 1675 and 1678 while conflicts over land between Indigenous people and colonists helped trigger Bacon’s Rebellion in Virginia in 1676. Equally troubling, New France was expanding its colonial territory, and many colonists were wary of Catholics gaining political power in Maryland. In the colonists’ view, Catholics and Native Americans sought to destroy English America. 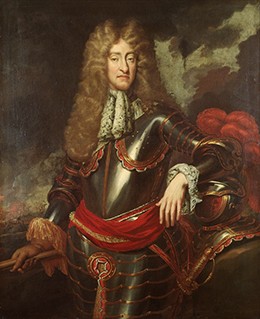 James worked to model his rule on the reign of the French Catholic King Louis XIV, his cousin. This meant centralizing English political strength around the throne, giving the monarchy absolute power. Also like Louis XIV, James II practiced a strict and intolerant form of Roman Catholicism after he converted from Protestantism in the late 1660s. He had a Catholic wife, and when they had a son, the potential for a Catholic heir to the English throne became a threat to English Protestants.

James also worked to modernize the English army and navy. The fact that the king kept a standing army in times of peace greatly alarmed the English, who believed that such a force would be used to crush their liberty. As James’s strength grew, his opponents feared their king would turn England into a Catholic monarchy with absolute power over its people.

The Dominion of New England

In 1686, James II applied his concept of a centralized state to the colonies by creating an enormous colony called the Dominion of New England. The Dominion included all the New England colonies (Massachusetts, New Hampshire, Plymouth, Connecticut, New Haven, and Rhode Island), and in 1688 was enlarged by the addition of New York and New Jersey. James placed in charge Sir Edmund Andros, a former colonial governor of New York. Loyal to James II and his family, Andros had little sympathy for New Englanders. His regime caused great uneasiness among New England Puritans when it called into question the many land titles that did not acknowledge the king and then imposed fees for their reconfirmation. Andros also committed himself to enforcing the monopolistic Navigation Acts, a move that threatened to disrupt the region’s trade, which was based largely on smuggling. 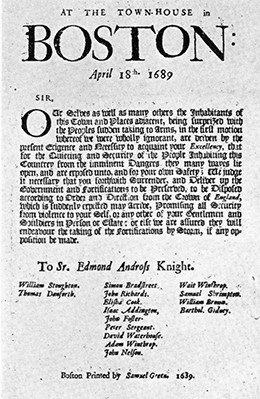 In England, opponents of James II’s efforts to create a centralized Catholic state were known as Whigs. The Whigs worked to depose James, and in late 1688 they succeeded, an event they celebrated as the Glorious Revolution.

When the king fled to France in December, Parliament invited William of Orange, the Protestant Dutch Stadtholder and James’s son-in-law, with his wife Mary, to take the throne. The colonists in America declared allegiance to the new monarchs. They did so in part to maintain order in their respective colonies. As one Virginia official explained, if there was “no King in England, there was no Government here.” A declaration of allegiance was therefore a means of ensuring stability.

More importantly, colonists declared allegiance for William and Mary because they believed their ascension marked the rejection of absolutism and confirmed the centrality of Protestantism in English life. Settlers joined in the revolution by overthrowing the Dominion government, restoring the provinces to their previous status, and forcing out the Catholic-dominated Maryland government.

In 1689, Bostonians overthrew the government of the Dominion of New England and jailed Sir Edmund Andros as well as other leaders of the regime. The removal of Andros from power illustrates New England’s animosity toward the English overlord who during his tenure had established Church of England worship in Puritan Boston and vigorously enforced the Navigation Acts, to the chagrin of those in port towns. In New York, the same year that Andros fell from power, Jacob Leisler led a group of Protestant New Yorkers against the Dominion government. Acting on his own authority, Leisler assumed the role of King William’s governor and organized intercolonial military action independent of British authority. Leisler’s actions usurped the crown’s prerogative and, as a result, he was tried for treason and executed. In 1691, England restored control over the Province of New York.

For English colonists, it was indeed a “glorious” revolution as it united them in a Protestant empire that stood counter to Catholic tyranny, absolutism, and growing French power on the continent.

The Glorious Revolution led to the establishment of an English nation that limited the power of the king and provided protections for English subjects. In October 1689, the same year that William and Mary took the throne, the 1689 Bill of Rights established a constitutional monarchy. It demanded Parliament’s independence from the monarchy and protected a certain number of Parliament’s rights, such as the right to freedom of speech, the right to regular elections, and the right to petition the king. The 1689 Bill of Rights also guaranteed certain rights to all English subjects, including trial by jury and habeas corpus (the requirement that authorities bring an imprisoned person before a court to demonstrate the cause of the imprisonment).

John Locke (1632–1704), a doctor and educator who had lived in exile in Holland during the reign of James II and returned to England after the Glorious Revolution, published his Two Treatises of Government in 1690. In it, he argued that government was a form of contract between the leaders and the people, and that representative government existed to protect “life, liberty and property.” Locke rejected the divine right of kings and instead advocated for the central role of Parliament with a limited monarchy. Locke’s political philosophy had an enormous impact on future generations of colonists and established the paramount importance of representation in government.

William and Mary ruled jointly until her death in 1694. William remained as the sole monarch until his own death in 1702. William was followed on the throne by Mary’s younger sister Anne, the last Stuart ruler, under whom the Act of Union was created, unifying the Parliaments of Scotland and England. From this point in time on, England is referred to as Great Britain. Because Anne’s heir had predeceased her, upon her death the English Crown passed to the nearest Protestant relatives of the Stuarts, the Electors of Hanover. George I was the first Hanoverian to take the throne of England. His grandson George III was the king at the time of the American Revolution.

The Glorious Revolution also led to the English Toleration Act of 1689, a law passed by Parliament that allowed for greater religious diversity in the Empire. This act granted broader religious freedom to nonconformists such as Trinitarian Protestants (those who believed in the Holy Trinity of God: the Father, Son, and Holy Ghost), Baptists (those who advocated adult baptism), and Congregationalists (those who followed the Puritans’ lead in creating independent churches). While the Church of England remained the official state religious establishment, the Toleration Act gave much greater religious freedom to nonconformists. However, these allowances did not extend to Catholics, who were routinely excluded from political power. The 1689 Toleration Act extended to the British colonies, where several colonies—Pennsylvania, Rhode Island, Delaware, and New Jersey—refused to allow the creation of an established colonial church, a major step toward greater religious diversity.

What was the outcome of the Glorious Revolution?

Show Answer
James II was overthrown, and William III and Mary II took his place. The 1689 Bill of Rights limited the future power of the monarchy and outlined the rights of Parliament and Englishmen. In Massachusetts, Bostonians overthrew royal governor Edmund Andros.

Dominion of New England: James II’s consolidated New England colony, made up of all the colonies from New Haven to Massachusetts and later New York and New Jersey

Glorious Revolution: the overthrow of James II in 1688, resulting in the ascension of William and Mary to the throne

nonconformists: Protestants who did not conform to the doctrines or practices of the Church of England