Religious violence plagued sixteenth-century England. While Spain plundered the New World and built an empire, England struggled as Catholic and Protestant monarchs vied for supremacy and attacked their opponents as heretics. Queen Elizabeth cemented Protestantism as the official religion of the realm, but questions endured as to what kind of Protestantism would hold sway. Many Puritans looked to the New World as an opportunity to create a beacon of Calvinist Christianity, while others continued the struggle in England. By the 1640s, political conflicts between Parliament and the Crown merged with long-simmering religious tensions. The result was a bloody civil war. Colonists reacted in a variety of ways as England waged war on itself, but all were affected by these decades of turmoil. 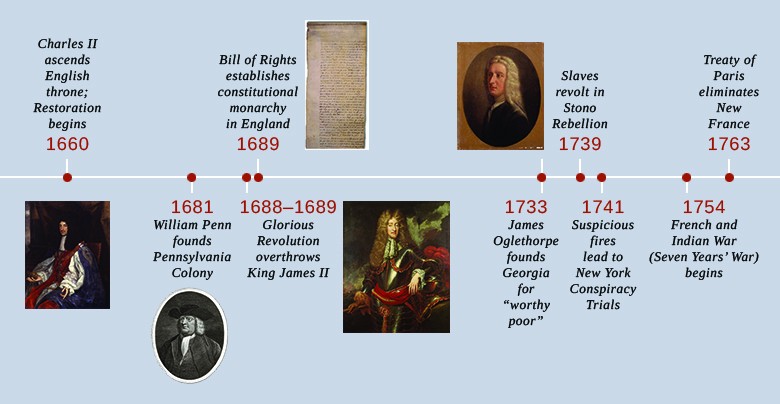 Figure 1. This timeline shows major events in England and British America during the 17th and 18th centuries.

The outbreak of civil war between the King and Parliament in 1642 opened an opportunity for the English state to consolidate its hold over the American colonies. The conflict erupted as Charles I called a parliament in 1640 to assist him in suppressing a rebellion in Scotland. The Irish rebelled the following year, and by 1642 strained relations between Charles and Parliament produced a civil war in England. The English Civil War lasted from 1642 to 1649 and pitted the king and his Royalist supporters against Oliver Cromwell and his Parliamentary forces. After years of fighting, the Parliamentary forces gained the upper hand, and in 1649, they charged Charles I with treason and beheaded him. The monarchy was dissolved, and England became a republic: a state without a king. Oliver Cromwell headed the new English Commonwealth, and the period known as the English Interregnum, or the time between kings, began. 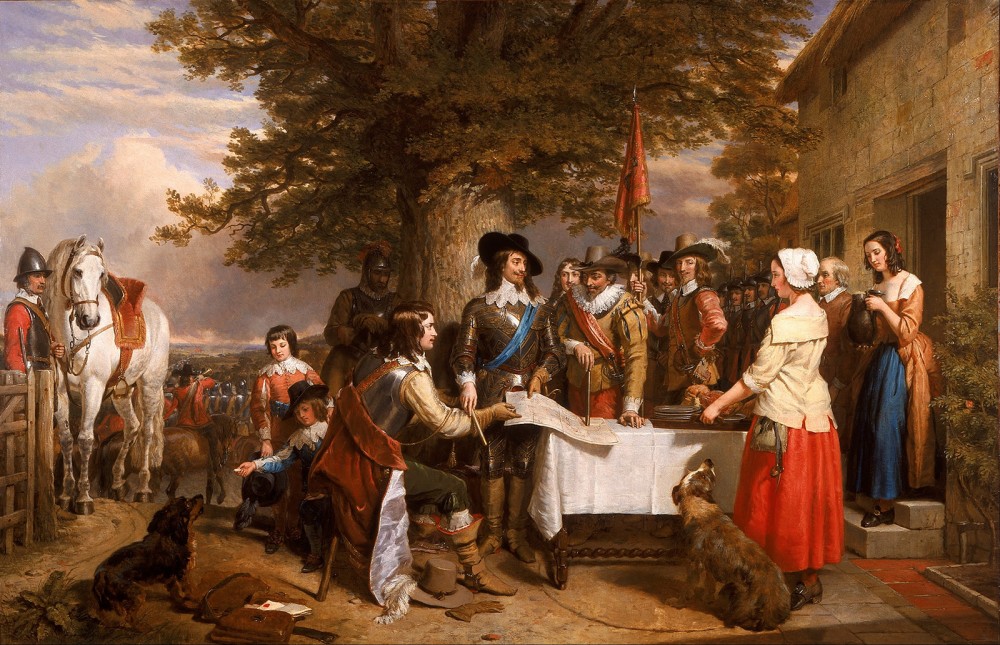 Figure 2. King Charles I, pictured with the blue sash of the Order of the Garter, listens to his commanders detail the strategy for what would be the first pitched battle of the First English Civil War. As all previous constitutional compromises between King Charles and Parliament had broken down, both sides raised large armies in the hopes of forcing the other side to concede their position. The Battle of Edgehill ended with no clear winner, leading to a prolonged war of over four years and an even longer series of wars (known generally as the English Civil War) that eventually established the Commonwealth of England in 1649.

Watch this video to understand the context of the English Civil War, including the religious and political tensions that led to the eventual execution of Charles I, the rule by Oliver Cromwell, and the return of Charles II to the throne.

You can view the transcript for “What Was the English Civil War?” here (opens in new window).

Though Cromwell enjoyed widespread popularity at first, over time he appeared to many in England to be taking on the powers of a military dictator. Dissatisfaction with Cromwell grew. When he died in 1658 and control passed to his son Richard, who lacked the political skills of his father, a majority of the English people feared an alternate hereditary monarchy in the making. They had had enough and asked Charles II to be king. In 1660, they welcomed the son of the executed King Charles I back to the throne to resume the English monarchy and bring the interregnum to an end. The return of Charles II is known as the Restoration.

Charles II was committed to expanding England’s overseas possessions. His policies in the 1660s through the 1680s established and supported the Restoration colonies: the Carolinas, New Jersey, New York, and Pennsylvania. All the Restoration colonies started as proprietary colonies, that is, the king gave each colony to a trusted individual, family, or group.

Changing Relationships with the Colonies

In 1642, no permanent British North American colony was more than 35 years old. The crown and various proprietors controlled most of the colonies, but settlers from Barbados to Maine enjoyed a great deal of independence. This was especially true in Massachusetts Bay, where Puritan settlers governed themselves according to the colony’s 1629 charter. Trade in tobacco and naval stores tied the colonies to England economically, as did religion and political culture, but in general the English left the colonies to their own devices.

The English civil war forced settlers in America to reconsider their place within the empire. Older colonies like Virginia and proprietary colonies like Maryland sympathized with the crown. Newer colonies like Massachusetts Bay, populated by religious dissenters taking part in the Great Migration of the 1630s, tended to favor Parliament. Yet during the war, the colonies remained neutral, fearing that support for either side could involve them in war. Even Massachusetts Bay, which nurtured ties to radical Protestants in Parliament, remained neutral.

Charles’s execution in 1649 altered that neutrality. Six colonies, including Virginia and Barbados, declared open allegiance to the dead monarch’s son, Charles II. Parliament responded with an Act in 1650 that leveled an economic embargo on the rebelling colonies, forcing them to accept Parliament’s authority. Parliament argued in the Act that America had been “planted at the Cost, and settled” by the English nation and that it, as the embodiment of that commonwealth, possessed ultimate jurisdiction over the colonies.

Creating wealth for the Empire remained a primary goal, and in the second half of the seventeenth century, especially during the Restoration, England attempted to gain better control of trade with the American colonies. The mercantilist policies by which it tried to achieve this control are known as the Navigation Acts.

The 1651 Navigation Ordinance, a product of Cromwell’s England, required that only English ships carry goods between England and the colonies, and that the captain and three-fourths of the crew had to be English. The Ordinance further specified “enumerated articles” that could be transported only to England or to English colonies, including the most lucrative commodities like sugar and tobacco as well as indigo, rice, molasses, and naval stores such as turpentine. All were valuable goods not produced in England or were in demand by the British navy.

Over the next few years colonists’ unease about Parliament’s actions reinforced their own sense of English identity, one that was predicated on notions of rights and liberties. When the colonists declared allegiance to Charles II after the Parliamentarian state collapsed in 1659 and England became a monarchy the following year, however, the new king dashed any hopes that he would reverse Parliament’s consolidation efforts. The revolution that had killed his father enabled Charles II to begin the next phase of empire building in English America. 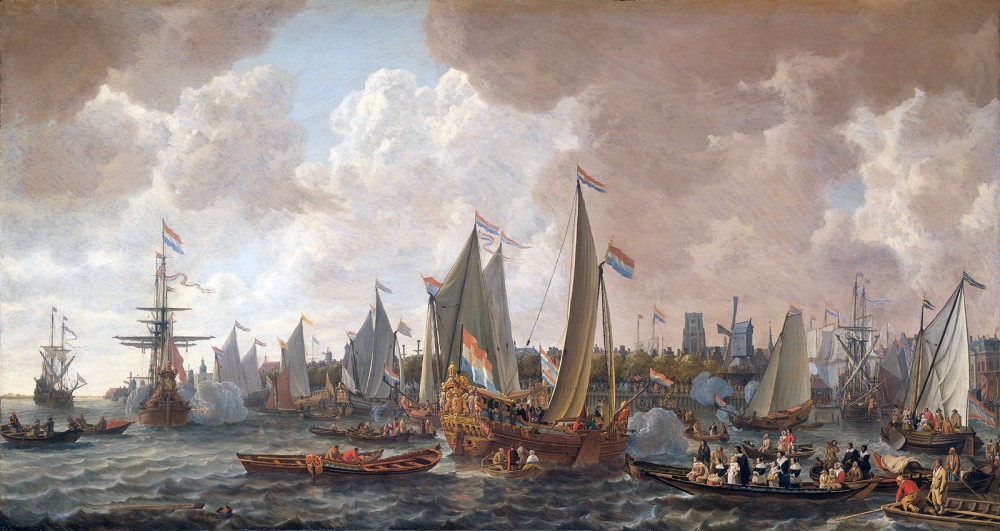 Figure 4. England found itself in crisis after the death of Oliver Cromwell in 1658, leading in time to the reestablishment of the monarchy. On his 30th birthday (May 29, 1660), Charles II sailed from the Netherlands to his restoration after nine years in exile. He was received in London to great acclaim, as depicted in his contemporary painting.

After ascending the throne, Charles II approved the 1660 Navigation Act, which restated the 1651 act to ensure a monopoly on imports from the colonies.

Other Navigation Acts included the 1663 Staple Act and the 1673 Plantation Duties Act. The Staple Act barred colonists from importing goods that had not been made in England, creating a profitable monopoly for English exporters and manufacturers. The Plantation Duties Act taxed enumerated articles exported from one colony to another, a measure aimed principally at New Englanders, who transported great quantities of molasses from the West Indies, including smuggled molasses from French-held islands, to make into rum.

In 1675, Charles II organized the Lords of Trade and Plantation, commonly known as the Lords of Trade, an administrative body intended to create stronger ties between the colonial governments and the crown. However, the 1696 Navigation Act created the Board of Trade, replacing the Lords of Trade. This act, meant to strengthen enforcement of customs laws, also established vice-admiralty courts where the crown could prosecute customs violators without a jury. Under this act, customs officials were empowered with warrants known as “writs of assistance” to board and search vessels suspected of containing smuggled goods.

Despite the Navigation Acts, however, Great Britain exercised lax control over the English colonies during most of the eighteenth century because of the policies of Prime Minister Robert Walpole. During his long term (1721–1742), Walpole governed according to his belief that commerce flourished best when it was not encumbered with restrictions. Historians have described this lack of strict enforcement of the Navigation Acts as salutary neglect. In addition, nothing prevented colonists from building their own fleet of ships to engage in trade. New England especially benefited from both salutary neglect and a vibrant maritime culture made possible by the scores of trading vessels built in the northern colonies. The case of the 1733 Molasses Act illustrates the weaknesses of British mercantilist policy. The 1733 act placed a sixpence-per-gallon duty on raw sugar, rum, and molasses from Britain’s competitors, the French and the Dutch, in order to give an advantage to British West Indian producers. Because the British did not enforce the 1733 law, however, New England mariners routinely smuggled these items from the French and Dutch West Indies more cheaply than they could buy them on English islands.

Interregnum: the period following the English Civil War when England was without a king and instead temporarily became a republic under Oliver Cromwell

Navigation Acts: a series of acts passed by the monarchy in the second half of the seventeenth century that exerted control over colonial trade so as to maximally benefit the crown, often building on earlier laws decreed by Parliament during the Interregnum

proprietary colonies: those established when the king gives each colony to a trusted individual, family, or group

Restoration: the name given to the beginning of the reign of King Charles II, which ended the English Interregnum and made Britain once again into a monarchy

salutary neglect: the laxness with which the English crown enforced the Navigation Acts in the eighteenth century