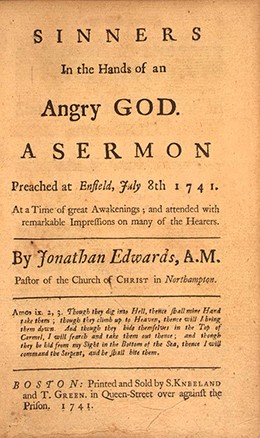 Figure 1. This image shows the frontispiece of “Sinners in the Hands of an Angry God, A Sermon Preached at Enfield,” July 8, 1741 by Jonathan Edwards. Edwards was an evangelical preacher who led a Protestant revival in New England. This was his most famous sermon, the text of which was reprinted often and distributed widely.

During the eighteenth century, the British Atlantic experienced an outburst of Protestant revivalism known as the First Great Awakening. (A Second Great Awakening would take place in the 1800s.) During the First Great Awakening, evangelists came from the ranks of several Protestant denominations: Congregationalists, Anglicans (members of the Church of England), and Presbyterians. They rejected what appeared to be sterile, formal modes of worship in favor of a vigorous emotional religiosity. Whereas Martin Luther and John Calvin had preached a doctrine of predestination and close reading of scripture, new evangelical ministers spread a message of personal and experiential faith that rose above mere book learning. Individuals could bring about their own salvation by accepting Christ, an especially welcome message for those who had felt excluded by traditional, more institutionally sanctioned Protestantism: women, the young, and people at the lower end of the social spectrum.

The Great Awakening caused a split between those who followed the evangelical message (the “New Lights”) and those who rejected it (the “Old Lights”). The elite ministers in British America were firmly Old Lights, and they censured this disruptive new revivalism. Indeed, the revivals did sometimes lead to chaotic excesses. In one notorious incident in 1743, an influential New Light minister named James Davenport urged his listeners to burn books. The next day, he told them to burn their clothes as a sign of their casting off the sinful trappings of the world. He then took off his own pants and threw them into the fire, but a woman saved them and tossed them back to Davenport, telling him he had gone too far.

Another outburst of Protestant revivalism began in New Jersey, led by a minister of the Dutch Reformed Church named Theodorus Frelinghuysen. Frelinghuysen’s example inspired other ministers, including Gilbert Tennent, a Presbyterian. Tennant helped to spark a Presbyterian revival in the Middle Colonies (Pennsylvania, New York, and New Jersey), in part by founding a seminary to train other evangelical clergyman. New Lights also founded colleges in Rhode Island and New Hampshire that would later become Brown University and Dartmouth College.

In Northampton, Massachusetts, Jonathan Edwards led still another explosion of evangelical fervor. Edwards’s best-known sermon, “Sinners in the Hands of an Angry God,” used powerful word imagery to describe the terrors of hell and the possibilities of avoiding damnation by personal conversion. One passage reads: “The wrath of God burns against them [sinners], their damnation don’t slumber, the pit is prepared, the fire is made ready, the furnace is now hot, ready to receive them, the flames do now rage and glow. The glittering sword is whet, and held over them, and the pit hath opened her mouth under them.” Edwards’s revival spread along the Connecticut River Valley, and news of the event spread rapidly through the frequent reprinting of his famous sermon.

The foremost evangelical leader of the Great Awakening was an Anglican minister named George Whitefield. Like many evangelical ministers, Whitefield was itinerant, traveling the countryside instead of having his own church and congregation. Between 1739 and 1740, he electrified colonial listeners with his brilliant oratory.

According to Whitefield, the only type of faith that pleased God was heartfelt. The established churches only encouraged apathy. “The Christian World is dead asleep,” Whitefield explained, “Nothing but a loud voice can awaken them out of it.” He would be that voice. Whitefield was a former actor with a dramatic style of preaching and a simple message. Thundering against sin and for Jesus Christ, Whitefield invited everyone to be born again. It worked. Through the 1730’s he traveled from New York to South Carolina converting ordinary men, women and children. “I have seen upwards of a thousand people hang on his words with breathless silence,” wrote a socialite in Philadelphia, “broken only by an occasional half suppressed sob.” A farmer recorded the powerful impact this rhetoric could have: “And my hearing him preach gave me a heart wound; by God’s blessing my old foundation was broken up, and I saw that my righteousness would not save me.” The number of people trying to hear Whitefield’s message were so large that he preached in the meadows at the edges of cities. Contemporaries regularly testified to crowds in the thousands, and in one case, over 20,000 in Philadelphia. Whitefield and the other itinerant preachers had achieved what Edwards could not–making the revivals popular.

Not everyone embraced George Whitefield and other New Lights. Many established Old Lights decried the way the new evangelical religions appealed to people’s passions, rather than to traditional religious values. The two illustrations below present two very different visions of George Whitefield.

Compare the two images above. On the left is an illustration for Whitefield’s memoirs, while on the right is a cartoon satirizing the circus-like atmosphere that his preaching seemed to attract (Dr. Squintum was a nickname for Whitefield, who was cross-eyed). How do these two artists portray the same man? What emotions are the illustration for his memoirs intended to evoke? What details can you find in the cartoon that indicate the artist’s distaste for the preacher?

The Great Awakening saw the rise of several Protestant denominations, including Methodists, Presbyterians, and Baptists (who emphasized adult baptism of converted Christians rather than infant baptism). These new churches gained converts and competed with older Protestant groups like Anglicans (members of the Church of England), Congregationalists (the heirs of Puritanism in America), and Quakers. The influence of these older Protestant groups, such as the New England Congregationalists, declined because of the Great Awakening. Nonetheless, the Great Awakening touched the lives of thousands on both sides of the Atlantic and provided a democratizing, shared experience in the eighteenth-century British Empire.

By the 1760s, the religious revivals had petered out; however, they left a profound impact on America. Leaders like Edwards and Whitefield encouraged individuals to question the world around them. This idea reformed religion in America and created a language of individualism that promised to change everything else. If you challenged the church, what other authority figures might you question? The Great Awakening provided a language of individualism, reinforced in print culture, which reappeared in the call for independence. While pre-revolutionary America had profoundly oligarchical qualities, the groundwork was laid for a more republican society. However, society did not transform easily overnight. It would take intense, often physical, conflict to change colonial life.

This video summarizes the revivals associated with the Great Awakening.

You can view the transcript for “The Great Awakening” here (opens in new window).