Note:  This test may need to be updated and/or revised to accurately reflect current statistics, research findings, and health trends.

a. It may increase your LDL cholesterol levels.

b. It may reduce your LDL cholesterol levels.

c. It may increase your blood glucose levels.

d. It has no effect on your cholesterol levels.

2. Place a check mark beside EACH “healthy” fat below:

3. Olive oil is a good choice to consider when trying to incorporate more “healthy fats” into your diet.

4. Which type of fiber has been shown to potentially help lower “bad” cholesterol levels?

5. Which nutrient would be the most helpful in promoting regularity (i.e. relieving constipation)?

6. Explain what type 2 diabetes is (i.e. what happens in the body), and discuss how/why it can damage the body over time:

7. Anxiety disorders affect approximately how many American adults in a given year?

9. Identify and briefly explain each stage of Maslow’s Hierarchy of Needs in the correct order below: 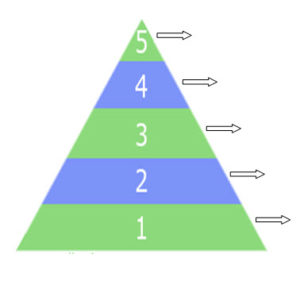 10. Choose ONE of the following defense mechanisms, and explain what it is:

d. all of the above

12. Generalized Anxiety Disorder (GAD) is diagnosed when a person worries excessively about a variety of everyday problems for…?

13. Agoraphobia can best be described as a fear of…?

14. A treatment approach in which a person gradually encounters the object or situation that is feared, perhaps at first only through pictures or videos, then later face-to-face, is known as…?

15. Major depression is an episode of sadness or apathy along with other symptoms that lasts at least ______________ and is severe enough to interrupt daily activities.

16. Long-term milder symptoms, lasting 2 years or longer, that prevent normal functioning or feeling well, is best described as which condition?

17. The FDA has placed a “black box” warning label on all antidepressant medications to alert the public about the potential increased risk of…?

a. dangerous interactions that may occur with over-the-counter (OTC) products

d. suffering from a heart attack

18. Place a check mark beside EACH fat-soluble vitamin below:

19. What is found in certain foods that can help protect the body from damage by free radicals?

d. none of the above

20. The words “organic” and “natural” mean the same thing on food labeling, and must adhere to the same standards.